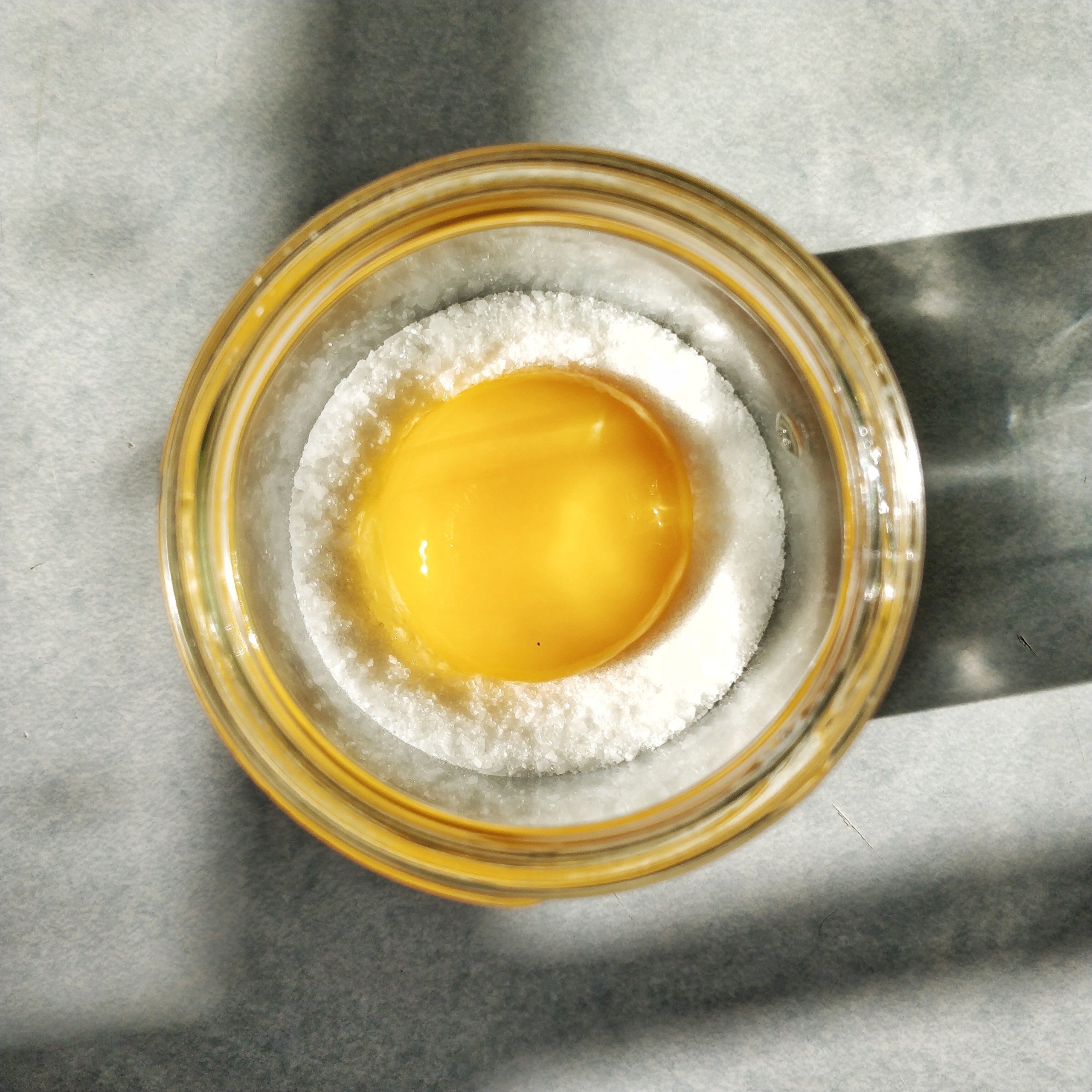 I accidentally dropped an egg on the counter today. Then I remembered that the Lunar New Year will be upon us in a week, which is just enough time to cure some egg yolks!

The next day I realized that we had just bought duck eggs as well, so it was a perfect opportunity to do a side-by-side comparison.

For each yolk, I mixed 50g kosher salt and 50g granulated sugar as a cure. I put half of the cure in the jar, made an indentation for the yolk to sit in, then gently dropped in the yolk (yes, with my hand) and covered it with the remaining cure. These will sit on the counter until next week.

But what to do with the egg whites (AKA albumen)? I know that my friends at Larder and Shared Cultures have made amino sauces from egg whites, but I don’t have fresh koji on hand. I do, however, have shiokoji, which is just rice koji with an equal part water and 5% salt added.

For each egg white, I added the same amount by weight of shiokoji and thoroughly whisked to combine. These will also sit on the counter until next week, though I usually let shiokoji go for at least 10 days before using.

The egg white experiment hasn’t had the amazing results I was hoping for, but at least nothing smells like rotten eggs. There appears to be some separation, but the albumen has been completely liquefied and the mixture is generally thinner than it was before, now like the consistency of milk. I do not find anything offensive in the taste—compared to plain shiokoji, it is slightly sweeter, silkier, but perhaps too subtle in flavor. Not sure what to do with this yet.

The yolks have been unearthed! They were both slightly “jammy” on the outside, so they spent about 6 hours in the dehydrator at 140°F/60°C. The duck yolk is still slightly tacky. It had one less day to cure, and is also slightly bigger than the chicken yolk, so maybe I should have left it longer, but I’m hoping it will sort itself out while air-drying overnight.

The cure mixture had absorbed quite a bit of moisture and, I’m assuming, flavor from the yolks, and if you know me you know I have to find a use for it. It tastes incredible, so I put it in the dehydrator with the yolks and then gave it a blitz in the grinder. There is still some moisture in it; it’s got a similar consistency to brown sugar. I’ve packed it into a sealed jar… I bet it would be amazing on popcorn!

Upon checking the yolks this morning, I discovered that the salt and sugar encrusted on one side was removable, and the yolks are still tacky underneath! Back into the dehydrator!

I accidentally left the yolks in the dehydrator for 2 days.

However! All appears to not be lost. The chicken yolk seems well-dried. The duck yolk has some oily residue on the bottom which I don’t think will dry away, so I’ll wipe it off as best as I can before storing it.

Checking in on our “amino sauce” as well, things do seem to be hapoening. The layers are separating differently, but still comes together when agitated.

The duck white is still pretty sweet tasting, but the chicken white looks slightly fizzy and is not as sweet tasting. Honestly, after the taste lingered for a while, I realized that the taste and texture reminds me of… phlegm. I know, appetizing, right?

Finally tasted them side-by-side. Altogether, both were fantastic. Deep umami, vaguely cheesey but not in a funky way. The duck yolk still kept some of its oiliness, which actually helped carry the flavor, coating the mouth for a long-taste.

I might just buy duck eggs solely for this purpose, as I found that I have a slight “uncanny valley” reaction to eating them fried—the texture is just slightly different and it kinda ruins the experience because I love (chicken) eggs. However, we did try them scrambled and they were good, though seemingly drier than chicken eggs scrambled. But with a sample size of one, perhaps I just overcooked them.

Today I heated the duck yolk over fettuccine alfredo, which was certainly tasty, but now I want to do something like a carbonara to let the yolk flavor shine.

Si, the little bottles of egg white “amino sauces” got tucked away behind some things and forgotten about. I noticed them today and, even though they were a bit “phlegmy” last time, I decided to check in. They were active enough to give a hiss when I opened them, and I was immediately hit with an alcoholic scent. Definitely was not expecting that, but as I mentioned earlier, my salt content calculation was way off and these ended up with only about 2.5% salt.

Still, I tasted them anyways, and am pleasantly surprised at the transformation that has occurred. Ok, so it’s still slightly phlegmy, but there is a vinegary taste that I was not expecting. I’ve essentially made liquid lactofermented egg whites, which I’m still not sure about, but it was an interesting experiment. I might try a full-blown shio koji style ferment with egg whites for comparison at some point. 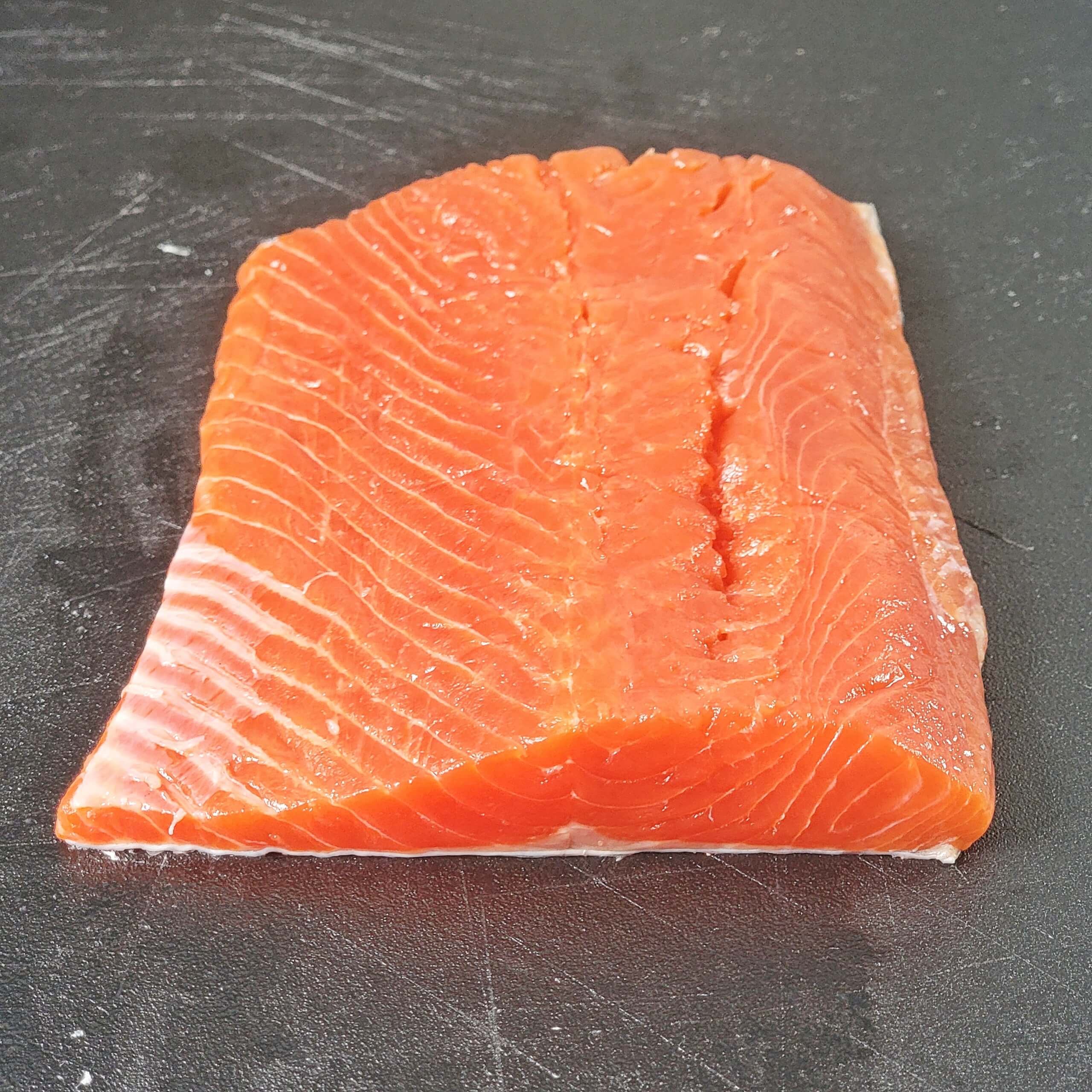