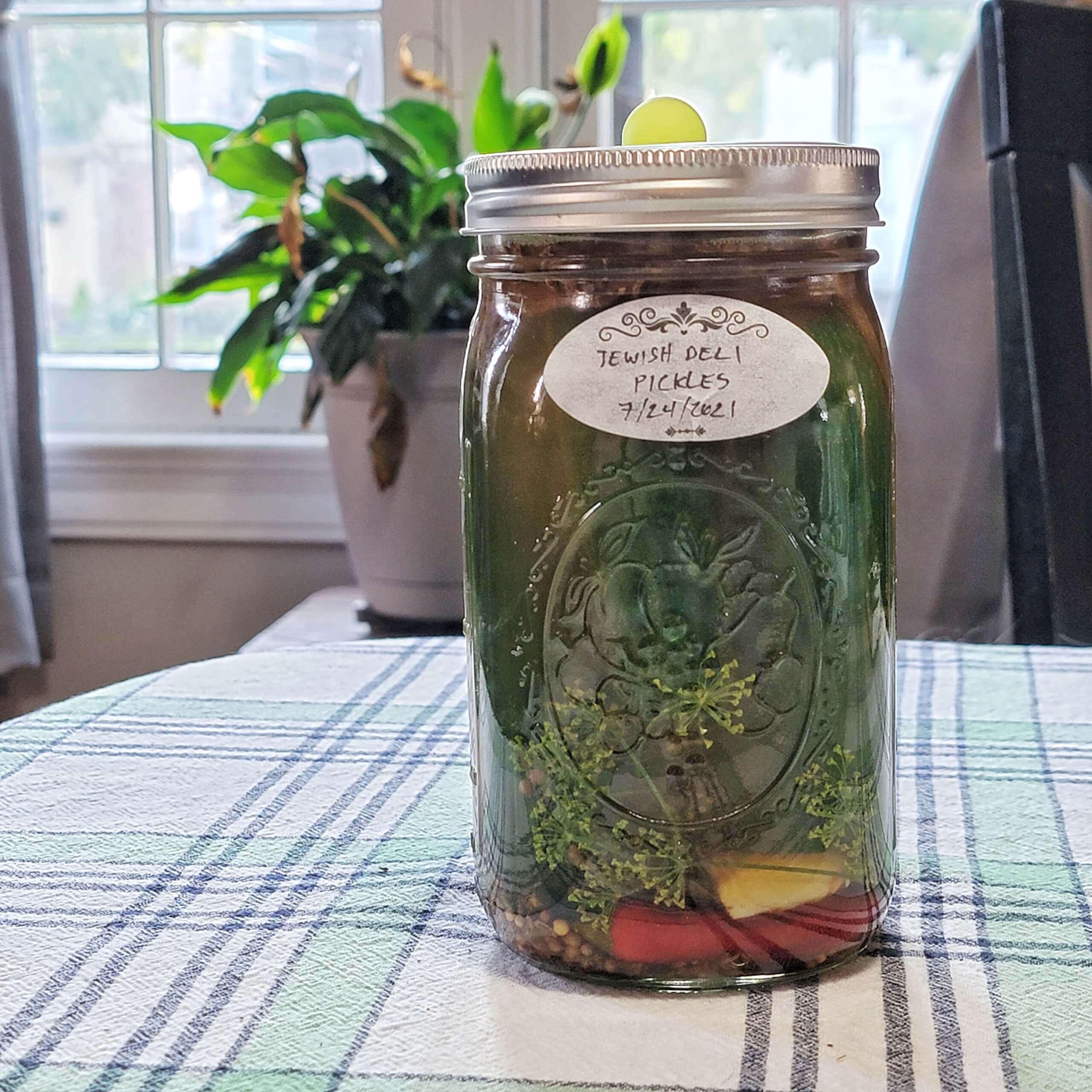 I must confess: I don’t think I’m very good at “pickles”. You know, the cucumber kind. It starts with the cucumbers themselves, of course. Every year I grow “pickling cucumbers” in my garden, and every year they seem to go straight from gerkin to overripe—often, they will begin ripening too much on one end but still be underdeveloped on the other! And once they start developing seeds, the texture of the final pickle is just… meh.

Then, there’s the short-term fermentation time. I enjoy fermenting cabbage in all it’s forms: cabbage and other brassicas are hardy and really darn tasty after fermenting for a year. Cucumbers, on the other hand, are, well, a little fragile. I generally prefer long ferments because set-and-forget is a lifestyle that I am here for. Ferments that require my attention less than a month in are probably not going to do well in my house.

Cucumber pickles are often eaten “half-sour” (which to me sounds like “half-done”), requiring you to check in after so many days and move to the refrigerator. And if you’ve pickled cucumbers before, you’re bound to run into all sorts of tips, tricks, and incantations for crisp pickles, usually involving grape or oak leaves, or even black tea.

So, for me, cucumbers are hard to get right.

But here I am, having another go.

Since I’ve not had good results with the “pickling” variety, this year I grew a different cucumber that is of the “slicing” variety (Shintokiwa). That is, they’re generally long and thin, and won’t fit in a standard mason jar. But I generally cut off the ends anyways, so I’ll just cut these in half. They’ve been growing in nicely, and I have three that are not too ripe, but just ripe enough to be picklable.

I found this recipe for The Hirshon Authentic Jewish Half-Sour Dill Pickles that I’m roughly following (with a much smaller batch size), at least for the addition of a heel of rye bread at the very beginning.

I’m also adding caraway as a main pickling spice, though the recipe doesn’t call for it directly (except as part of the rye bread). There’s this local place called Lox, Stock, and Brisket the has really amazing pickles and I think caraway (and maybe the rye bread) might be the secret.

I’m also trying black tea in these pickles for the first time. Ideally I would have used loose leaf, but I didn’t have any, so I’ve used a tea bag.

I filled the bottom of the clean Mason jar with the spices, garlic, chili, and head of fresh dill. Cucumbers fit perfectly, 6 little pickles packed tightly together. Tea bag on top, then capped with the heel of rye bread.

Mixed the brine together (I use pickling salt for this, no heating necessary) and poured in over the bread leaving roughly 1/3″ headspace. Capped with the silicone fermentation lid and set on the counter.

I had some brine remaining, I’ve kept it in a separate jar since I know I’ll be removing the bread and I’ll likely need a top-up.

The brine has taken on a fairly dark color, and I’m not sure if it’s mainly from the bread or the tea bag. I’ve removed the bread, it’s done it’s job and it will only get harder to remove as time goes on. I topped up the brine.

See? I was supposed to check in on the pickles after 4 days, but here I am at day 9! Well, better late than never I suppose.

I removed the tea bag—I assume it has also done it’s job by now.

Oo. Oh yeah. These are good. I wouldn’t describe them as “half sour” anymore and that’s perfectly fine by me. They may be “full sour” but they have not lost their crunch! And the caraway is a fantastic addition—frankly, I’ll be adding double or triple the amount next time.

Though I don’t think it’s necessarily bad, there is a faint but distinct black tea aftertaste that is lingering long after I did my taste test. It was not easily detectable at the time of tasting, but anyone saying that adding black tea doesn’t affect the flavor is definitely dead wrong. Or perhaps I’m at fault for using a tea bag, but I don’t have looseleaf on hand.

I dont feel like the use of “slicing cucumbers” has negatively affected the outcome in the slightest. This current variety I’ve grown this year will likely become a staple in my garden.

I’ve put just a plastic lid on this and set it in the fridge. I’m hoping these will last a few weeks at least, though I may not be able to help myself.

I did another batch using an oak leaf instead of a tea bag. Of course, I forgot to remove the bread after a day, so it stayed in for a full week. This is why I prefer low-maintenance ferments!

Luckily, the bread came out mostly intact, and the pickles taste great. No black tea aftertaste. If you are using a tea bag I’d suggest removing it with the bread after one day.