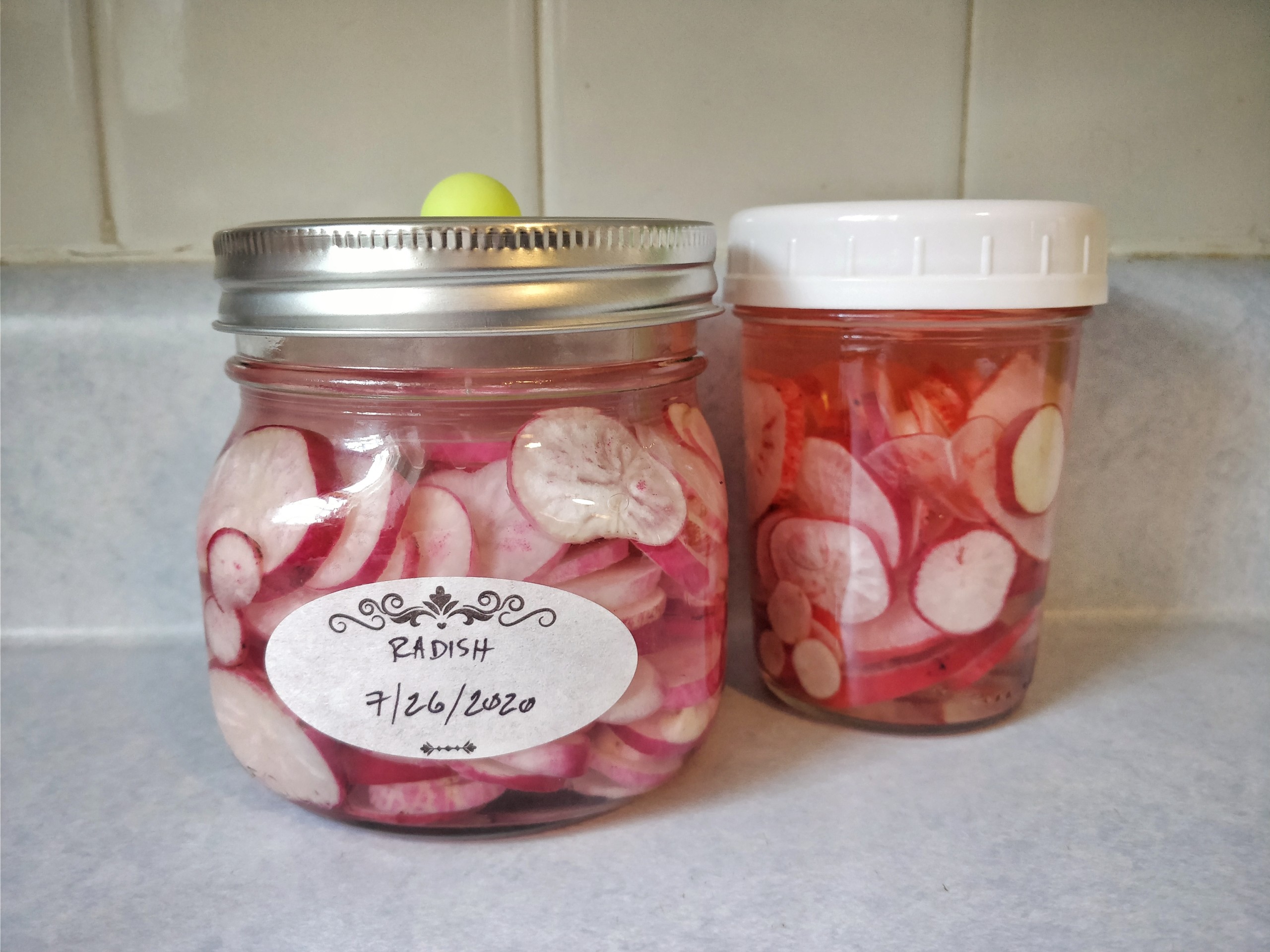 Every year I plant radishes, and every year I don’t get around to eating them all before they start to get really spicy and fibrous. So of course, this year I’m going to pickle the excess!

There’s really not much to this. Just like any other lactoferment we just need the vegetables, the brine, and some time. I trimmed and scrubbed the radishes, sliced them, and set them in some water while I prepared the brine.

Brine is 3% salt, I thought I needed more than I did so I added 15g salt to 500mL water. I really only needed about a cup/240mL, but the excess came in handy. I also added about a teaspoon of brine from some fermented giardiniera to kick-start the process. I’ll keep this on the kitchen counter because it should be ready in a week or so.

I couldn’t fit all of the slices in one jar so I also made a small jar of refrigerator pickles. Mixed 1/2 cup of the brine with 3/4 cup white vinegar and 2 tablespoons of sugar, though I only needed about 1/2 cup total to fill the small jar. We’ll try those in a day or two.

The vinegar really striped the color of the refrigerator pickles. I wonder if the finished result of fermentation will have the same effect?

Fermenting radishes have now had their skin color stripped about as much as the vinegar-packed radishes. I honestly expected it to take longer, but there was really only about a day of difference.

It’s been long enough for the lactofermented radishes to do a taste test. They have softened a bit, and have not picked up much Tang at all from fermentation. Rather, they are earthy and taste of sulfer in a not too unpleasant way. It is the natural taste of a radish with the spicy bite mellowed away completely. These would be good for a savory application, though I’m not sure what yet.

The vinegar pickles taste mostly like vinegar, with a hint of sweetness and a sulfer aftertaste. They’ve also retained their crunch, and would not be out of place on a salad or taco.

Next time I pickle radishes, I will likely go the vinegar route, as I’m not sure how to use these lactofermented ones yet. They certainly aren’t bad, and might be fine served nestled amongst other pickles on a platter to serve as something of a palate cleanser.