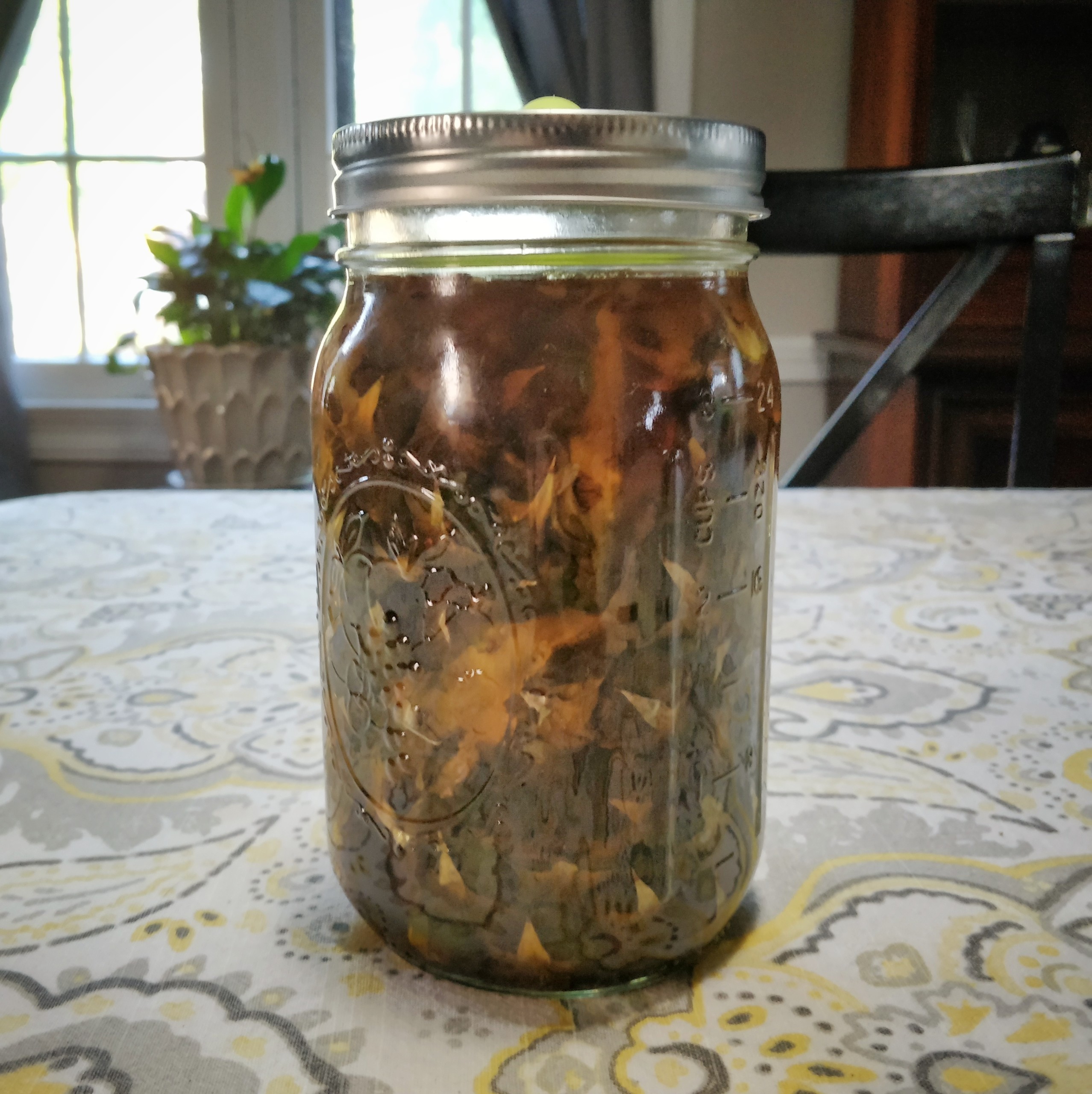 We just couldn’t help ourselves. We made a sort of “Dole Whip” drink with about a pound of pineapple, a cup of whipping cream, and about 1/4 cup brown sugar. And a few splashes of rum.

And then we realized that we were supposed to freeze the pineapple first, but it was a little late for that. Cups went into the freezer for 30 minutes, stirring halfway, to chill it up a bit. Still really tasty.

Anyways, I’ve made a larger batch of tepache that also includes cassia bark (cinnamon) this time.

I’ll leave that on the counter for potentially up to a week. Maybe more like 5 days; I’ll watch to measure activity and try to bottle it when it’s on a down-swing. I also went without an airlock this time, because this was the only glass jar large enough that I had on hand, and it’s still a relatively quick ferment.

I’ve decided to bottle at day four because there is a very thin film beginning to form on the surface. I do not want this to become a habitable environment for mold, so it’s time to strain and bottle.

Nothing much to it, strained through a fine mesh strainer lined with cheesecloth. I got 4 bottles worth this time, so I can open them after different stretches of time to see how it affects carbonation.

Four days after bottling, I’ve opened one of them. Effervescence is minimal—enough to hiss when opening but no foaming. Detectable on the tongue if you’re looking for it.

Definitely pleasant, with a hint of funkiness. Less intense than the first batch, which makes sense seeing that there was less pineapple to water.

Ten days after bottling, I’ve had another. No discernable difference in carbonation! The much higher ratio of pineapple in the first batch really affected the activity level, even though there’s about the same ratio of sugar. I’m happy to not have bottle bombs waiting for me in the fridge, at least.

Almost a month later, and no exploding bottle! Carbonation is really nice and fizzy but it didn’t even rush to the surface when opened. The pineapple taste is still prominent, and I’m enjoying the touch of cinnamon and clove that I probably wouldn’t recognize if I hadn’t made it myself.

I think this closes the book on tepache. I won’t be able to have another pineapple again without making it, and I’ll follow the ratio of sugar water to pineapple rind that I did with this second batch from now on.