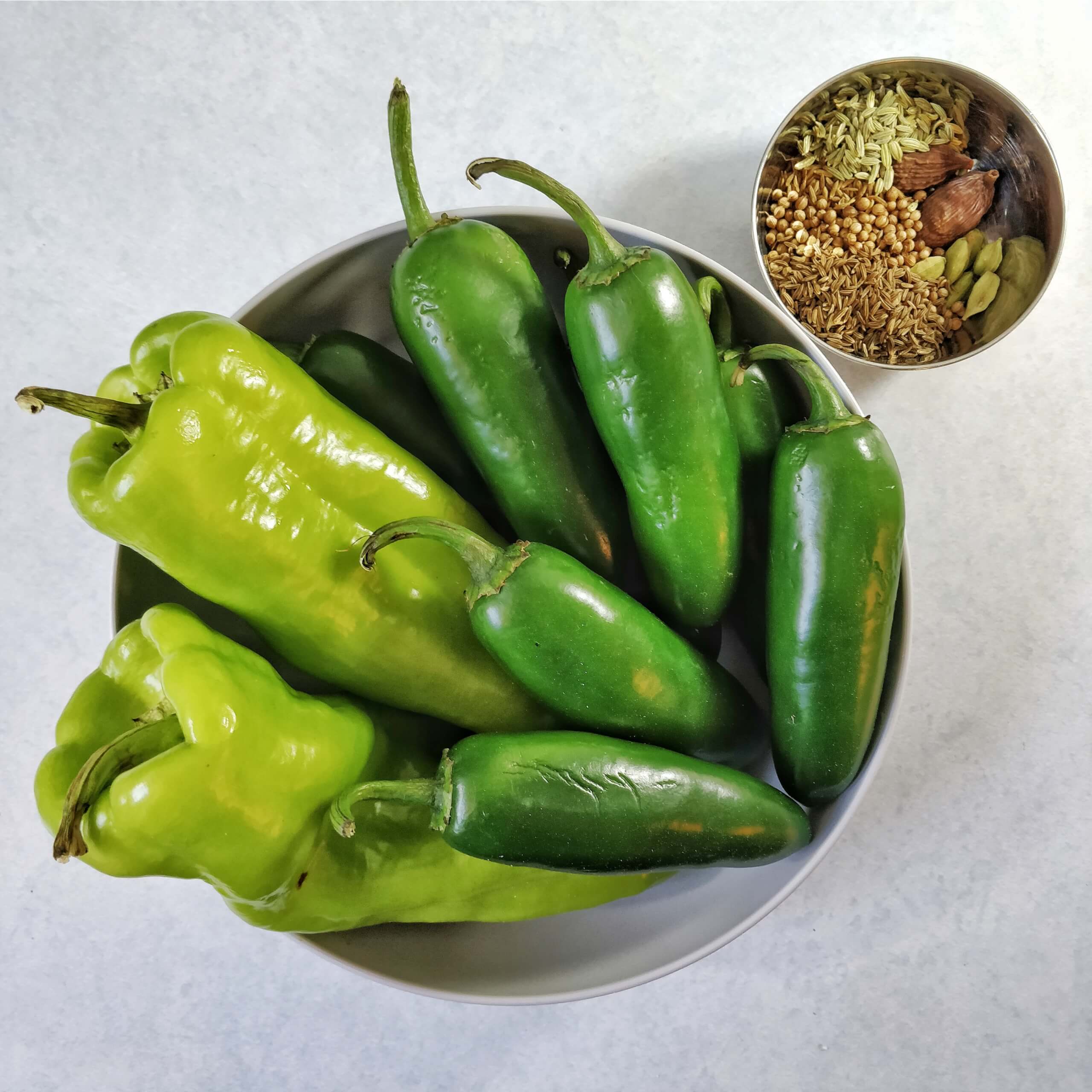 A friend on the official Crock of Time Discord server asked about a spiced hot sauce, which reminded me of my first attempt at fermented harissa. I made it from ripe red jalapenos and peppadews (which I just learned are called Juanita peppers) with lots of garlic and fresh ground spices. One deviation from the traditional recipe is the omission of oil, which I generally don’t add to my ferments due to the potential for botulism (see also: fermented giardiniera, I’ve got a batch going so I’ll post soon!).

This is also another vacuum bag chili ferment, as the title suggests. I’m not keen on putting “vacuum bag” in the title of every chili ferment going forward, but I know that people are finding this blog searching for that. It is likely I will continue to use this method as it has been the most convenient and issue-free of any other method I’ve used. It does come with a cost in plastic waste, however, which I’m not thrilled about.

This is an off-season batch, of course, as I won’t be getting ripe chilies from my garden for another month at least, so I had to rely on a local grocery store. I do also want this to be relatively mild, so it’s made up mostly of jalapenos and cubanelles. It is a bit special, though, for including a small amount of shio koji. I’ve added koji rice to chili ferments before but this time I’m leaning more on the chilies with just a little help from those enzymes.

Seeding is of course optional, and this will likely be a very mild sauce as a result, but I want a smooth sauce and heat is secondary.

The cubanelles got a good char with the kitchen torch. They need to contribute something since they’ve not got much in the way of heat. I could have also used poblanos, but the bright color of the cubanelles caught my eye.

Now for the spices:

After smashing the cardamom pods open, I gave the whole spices a short toast on the stove with medium-low heat until fragrant, a few minutes. After grinding and putting through a fine mesh sieve, I had 14g of spice powder.

Gotta have garlic, right? And I’ve got loads of wild garlic chives I’ve pulled out of my yard this year.

Altogether I had 566g total, including the chilies, garlic, and spices. To this, I’m adding 5% salt and 7.5% sugar. Why those specific quantities? I calculated them roughly from my previous successful batch. You could cut back on the salt, this being a vacuum bag ferment, and you might not need/want the sugar at all, but this resulted in something quite tasty to me. I’m also adding some shio koji, partly as a lactobacillus starter, and partially for those enzymes. Absent any rice to break down, I don’t expect it to get sweeter like adding koji rice would.

I blended this all up and also grabbed a pH measurement this time: roughly 6.5. This was a little tricky to seal in a vacuum bag, because it’s already fairly loose in consistency. I would prefer this to be thicker, so I might lightly roast/dehydrate it when it’s done fermenting which will also pasteurize it.

The original log says I fermented for 6 weeks, so I may abide by that depending on the CO2 activity in the bag. If all goes well I may have some mild green Harissa mid-July.

While there has been some dulling of color, the bag did not inflate. There has been some mild fermentation activity, as the pH has dropped slightly, but only slightly to 6 from 6.5. And we’re aiming for 4.5 or below!

I guess I should have checked in on this sooner when I noticed it wasn’t inflating. I’m going to add some brine from another recent ferment to inoculate and hopefully restart the fermentation, and see what happens in another few weeks or so.

I will say that I tasted it and it’s quite lovely. Fairly mild as I predicted, but flavorful.

Finally starting to see some CO2 action. There’s even more than the new hot sauce I just started a few weekends ago.