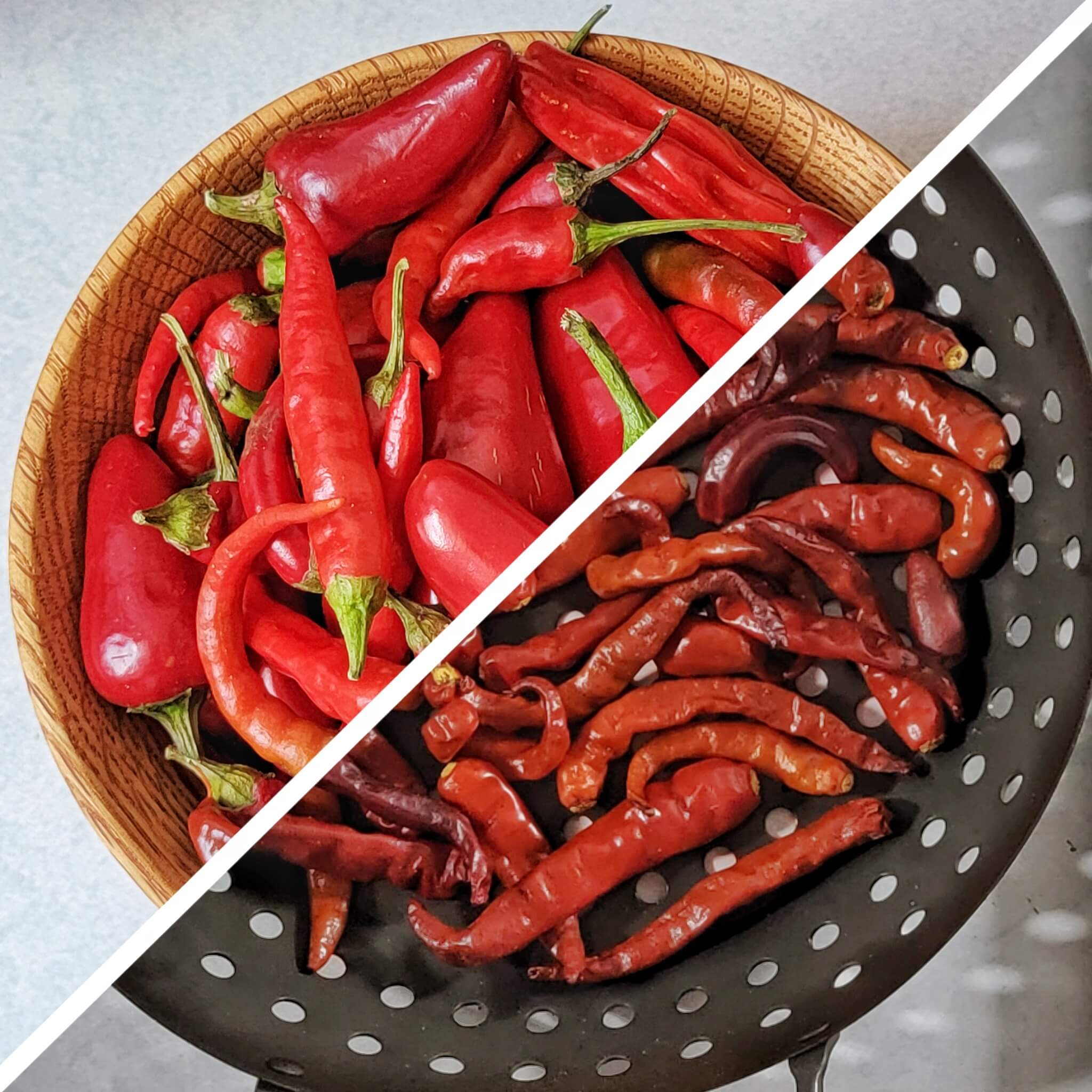 If you’ve seen my original Vacuum Bag Fermented Hot Sauce logbook, you’ll know that I grow my own chilies and that I generally don’t harvest enough at any given time for a full batch of hot sauce, so I usually freeze early, smaller harvests until I have enough to ferment all at once.

This year I decided to try a different method of preserving a larger early harvest for use later: smoking & drying. While I still had to keep some smaller harvests in the fridge for a week before there was enough to smoke, I had larger batches to work with this year because I have even more plants than last year.*

*Which also means that I have more chilies to experiment with… mushroom hot sauce anyone?

While I didn’t bother to record the exact amount of each type, the chilies I grew this year (and overwintered from last year) were:

I sliced the larger chilies in half lengthwise and smoked them for 8 hours in my Webber kettle grill (with the Slow n’ Sear insert) and kept the temp roughly between 180°–220°F. I found that keeping the temp lower like some people suggest had hardly any impact, especially on chilies not cut open like the Cayenne and Szechuan.

After smokong, it was late and I was worried about leaving them to dry overnight, so I set the dehydrator to 100°F. I was overly cautious—the next morning they still weren’t quite dry enough. 4 hours at 135°F did the trick.

I will keep these in the pantry until the primary harvest.

You may have thought the “-21” in the previous heading was a mistake, but I did that because the bulk ferment hadn’t started yet, which is primarily what I want to track.

Today was a sad day in my garden.

I had been waiting a few days for the chilies to ripen on the vine, and today I discovered that some rodent, probably mice, decimated my chilies. However, I mean “decimated” in the original sense that they probably took about 10% of it, so I do still have some to work with.

Prep was simple, I chopped it up thuroughly in a food processor. I’ve cut an 18 inch length of vacuum bag to store the mash in while it ferments. I had planned to add more chilies from bumper crops but I ended up using those for another experimental batch (stay tuned).

Its been roughly 3.5 months. I did have to cut open the bag once in the interim to release the pressure, but it has filled right back up again.

Last time, I used a hand-cranked food mill to remove the skin and seeds, but after that experience I vowed to never submit myself to that again. I now have an attachment for the stand mixer that handles this for me, which I previously used to juice a whole lot of tomatoes.

CAUTION: While this worked out, I did almost break it. Tomatoes have a much higher ratio of juice to skin & seeds than this fermented chili paste, which means you must feed the mash in at a slow pace!

I had a bit of a false start since the attachment flew apart after the solids had compacted before exiting. In order to thin out the mash, I added the vinegar to it first and blitzed it a few times in my blender before slowly drizzling the mash into the mill. Since there was roughly 3 cups of mash, I added:

After successfully passing through the mill, I had about 850mL of sauce. To that, I added:

Note that you should not add all of the xantham gum mixture all in one go, or you risk it getting too gloopy with no turning back, so add half, blend, and check the consistency before adding the rest. After less than a minute of blending on high to emulsify, the sauce is done! I’ve named it “Frozen Flame”, a reference to an important item in the game Chrono Cross.

Despite the addition of smoked chilies, there’s really just a hint of smoke flavor. It’s nice, but I think I would increase the ratio next time to be roughly half smoked chilies (by their original weight).

The flavor is very acidic with a bitter component, likely due to the 3+ month fermentation time plus the addition of vinegar. Last year’s hot sauce tastes very similar. Am I fermenting my hot sauce too long? I should do an experiment to find my ideal fermentation time.

Have you used smoked chilies in hot sauce? How long do you ferment your hot sauce? Let me know in the comments below or in the Crock of Time Discord!.