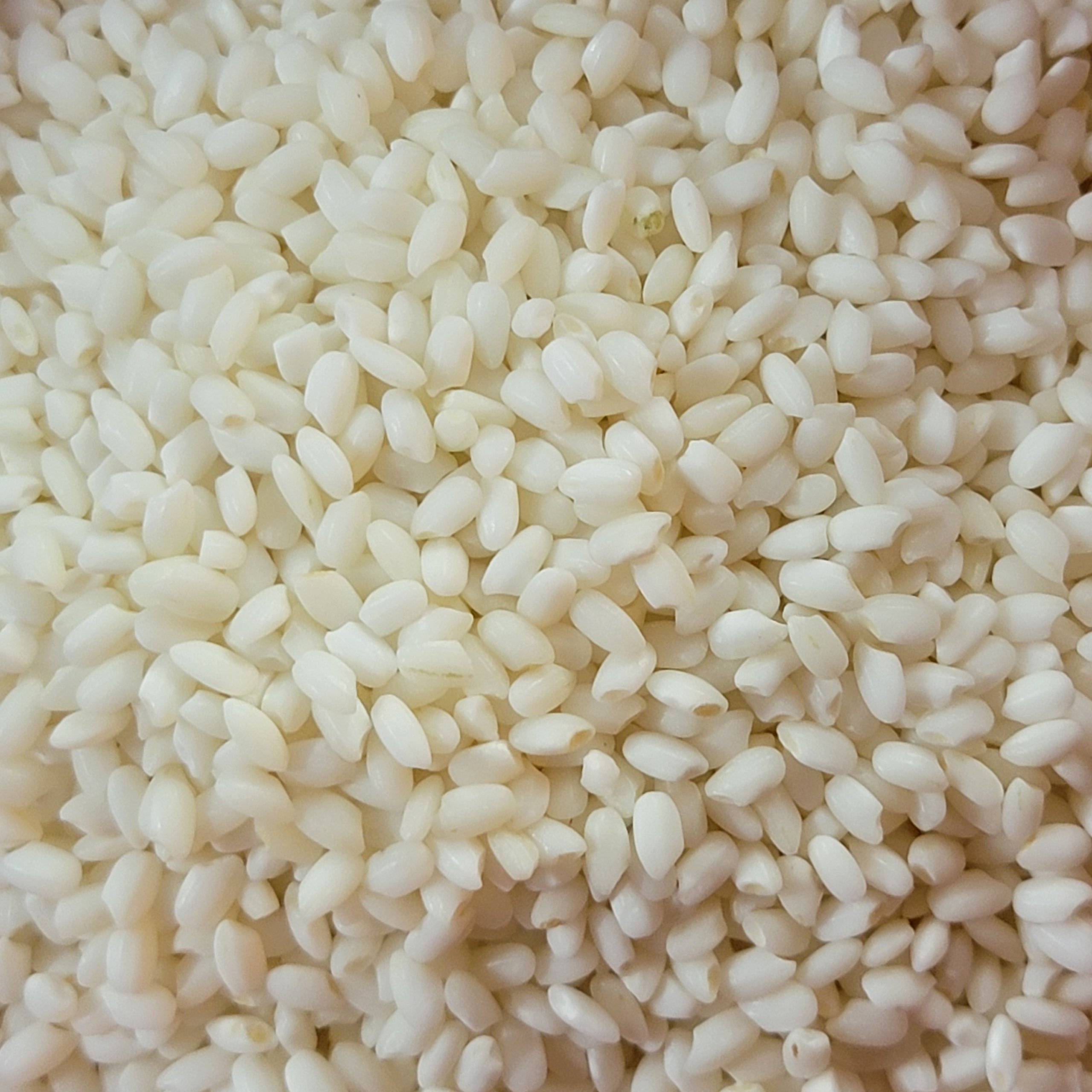 Thanks to fissionc in the Discord for pointing this out.

In order to really test it out, I’ve decided to do a side-by-side comparison with the usual rice. Also, Kojicon just started today, so I’m going to need plenty of koji rice anyways.

Both were thoroughly washed and soaked for 3 hours. After draining, I managed to fit each kilo of rice into both layers of my bamboo steamer. I drilled a different number of holes in each to keep track of which is glutinous rice. I considered steaming them separately (I only have the one steamer), but that would take 2 whole hours and I want to get to sleep at a reasonable time tonight.

Meanwhile, I set up the incubator. I’m still using the trusty old plastic bin that I used to put an immersion circulator into before switching to the aquarium heater.

After steaming over medium heat for 1 hour (swapping layers halfway), here’s what the rice looks like:

While both came off the rice napkin relatively cleanly, I found out while trying to spread the rice out that the glutinous rice is so much stickier. Basically impossibly to separate into individual grains.

After cooling to about 100°F, I spread my dispersed spores on both trays and did my best to mix it into the glutinous rice. While I don’t believe that every grain of rice must be perfectly coated in koji for a batch to be successful, I still am already pretty sure I won’t bother with this again.

Before the rice dries out, I covered with a cotton cloth sterilized by steaming for a few minutes. This will also help catch condensation in the incubator so that Koji growth isn’t disturbed. The sensor for the temperature controller, which the aquarium heater is plugged into, was set into the glutinous rice. Both trays were stacked in the chamber with the lid closed (though there’s a hole for air exchange) and wrapped in a heavy blanket, because my basement gets cold.

Temp is set to 90°F/32.2°C. The higher temperature will help push the amylase enzyme production which converts starches to sugars.

It’s 11pm on Monday, so this batch will be done 11am Wednesday, 36 hours later. I always start my koji incubation at night so that it’s ready sometime in the morning.

Rice temp has risen to 92.8°F/33.8°C. I’ve loosened the blanket insulation and unblocked the ventilation hole.

For me, my rice koji is always done at hour 36. Pushing it any further results in sporulation, which I don’t want for this batch.

These trays have gone immediately into the fridge, uncovered, to halt the growth and allow the rice to dry out a bit overnight.

Tomorrow, I plan to make some amazake from both to see if there is a significant difference. I suspect that, due to clumping, the glutinous rice has less concentrations of the amylase enzyme, but I’ll also be adding the same type of rice freshly cooked to each batch.

Note: after a day in the fridge I vacuum seal and freeze if I’m not using it immediately. I usually do 500g per bag and make some shiokoji with the leftover bits.

Time to put these kojis head-to-head. I’m making amazake from both. I’m kind of following the recommended ratio from Koji Alchemy (1 part koji, 1 part cooked rice, 2 parts water) except I never know what the weight of the cooked rice will be vs dry, and I don’t want to have random leftovers. So here’s how I’ve gone about fixing that particular issue:

Maybe it will end up too thick, but it was much easier.

I steamed the rice again, mostly because I can’t cook both of them simultaneously in my rice cooker, otherwise I would have just used that. It took about 15 minutes to steam to an edible consistency, and both rice types gained about 80g in weight, an increase of 40%. That means for each, I reduced the amount of water added by 80g.

I like to increase the surface area to optimize things a little, so I added the hot rice and cold water to the blender first, blitzed just a few seconds so the temp evened out, and then added the koji rice and blended for about 30 seconds or so. The result is by no means smooth, but that’s not necessary.

*NOTE: I probably should have set this water bath to 135°F/57°C. After some discussion in the Kojicon Slack, I’ve learned that the 131–135°F/55–57°C range is to optimize for both alpha amylase and glucoamylase, which have different optimal temperatures.

I was not expecting such a stark visuao difference between the regular (left) and glutinous (right) amazakes.

I was also not expecting there to be such a similar taste that it was hard for me to differentiate!

I blended both amazakes but did not strain. I really like the thickness, and it is really tasty while still warm.

I do think the glutinous rice amazake is a little more sugar-forward, but it’s close. Also getting more umami flavor from the regular rice, but of course it is present in the glutinous amazake too, though more in the aftertaste.

Perhaps I was right that the less optimal koji growth on the glutinous rice would mean that the amazake wouldn’t turn out as sweet as it could have. I should have done a 3rd jar with regular rice koji and cooked glutinous rice, which I will likely do soon. I might also do a glutinous koji rice only amazake (no added rice) to see if that makes a difference.

Dont bother using glutinous rice for growing koji, unless that’s really all you have on hand. It will work, but regular rice is much easier to work with and you’ll probably have better results.