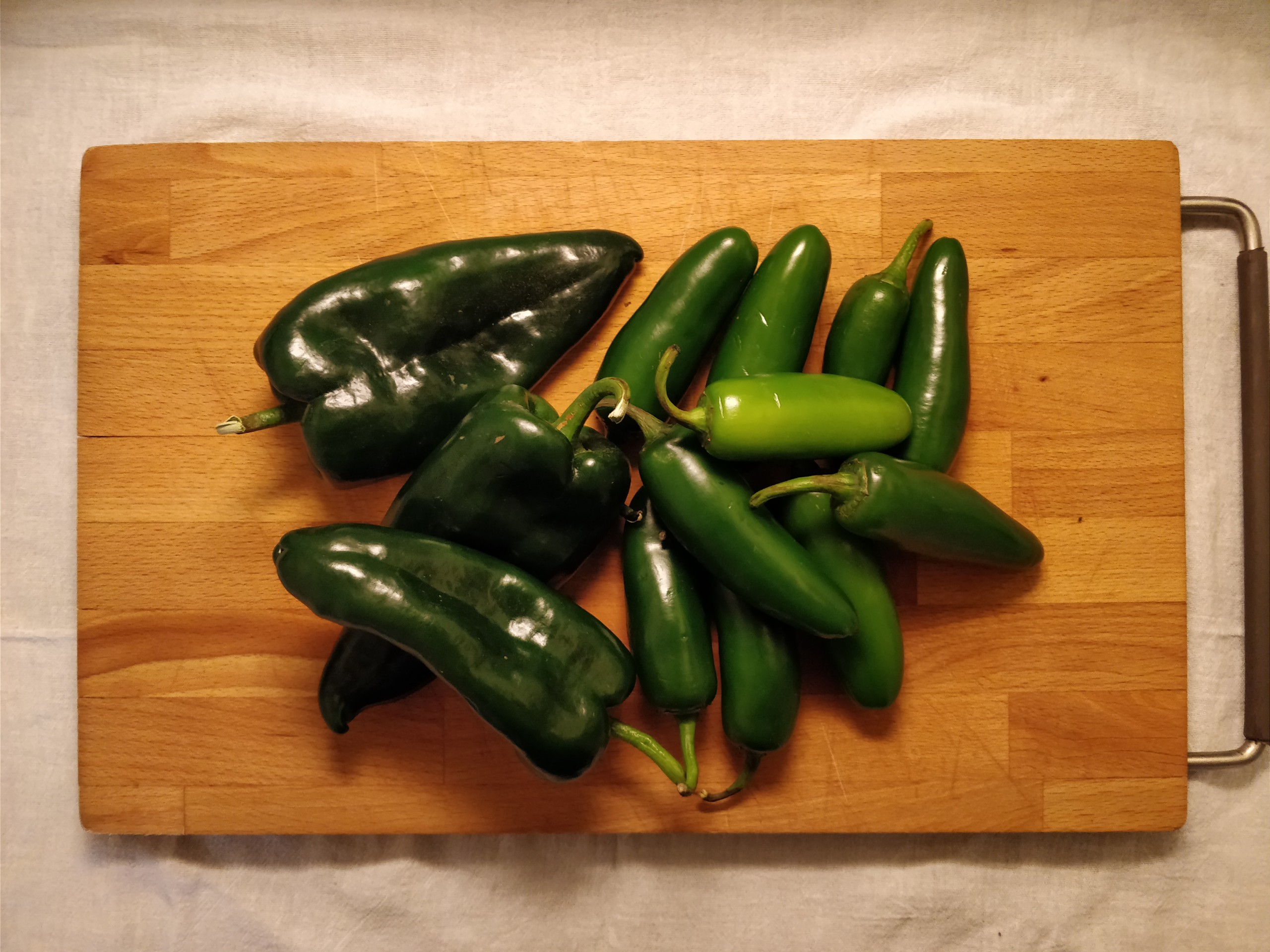 I’m running out of the hot sauce that I made with the mix of chilies from my garden last fall. I had about 1 liter of it at bottling, but after giving some away and trading some for things like honey and sake, I have precious little left. More chilies from the garden are several months away, so in a fit of desperation I bought about 1 lb of jalapeños and 3 poblanos at the grocery store so that I’ll at least have something by the time I have more to ferment.

Yea, I prefer the word “chili” over “pepper” when it comes to these beautiful piquant pods from the New World, if that wasn’t clear. “Pepper” just feels very… imperial. I’m sure I’ll get over it eventually.

I think I’ll go at the poblanos with a torch to get some char, and, because I’m feeling experimental after just receiving my copy of Koji Alchemy, I’m going to add the remaining barley koji I’ve been keeping in my fridge.

After donning gloves and roughly chopping, I’ve got:

In a miso, you’d want to add at least half the weight of the main substrate in koji. This is not a miso, but in the past I’ve combined a chili mash with koji in roughly the same 2:1 ratio and had good results.

Mixed everything up and mashed slightly, it comes up about halfway in a quart mason jar, about 1L. While it seems like I’m doing a mash-style ferment, I simply prefer to keep the ratio of brine to chilies as low as possible so that as much of the flavor as possible ends up in the final sauce, or at least that’s my thinking with a more traditional brine ferment. Generally I would remove the fermented chilies from the brine, put them through a food mill, then add only a portion of the brine back in while adding plenty of vinegar. Anyways, the point is that I like to mix my salt and substrate together first and then add additional brine at the same salt percentage to top it up, instead of guessing what the level of salt will be when adding brine only.

I have made hot sauce in the past using the “kraut” method of drawing out the water in the substrate via salt and not adding any additional brine, but I had to add onion to the mix to get enough liquid. I may try that method again at some point, because the mash ferments I’ve done needed a bit of babying in the form of stirring to prevent mold (and sometimes removing it).

I’m adding 500mL of a 5% salt brine (25g salt) to the mix (see, we’ve kept our total salt ratio the same at 5%) because I think, with the addition of the barley koji, the sauce might stand on its own without vinegar.

I also added two nappa cabbage leaves on top to keep the chunks of chili under the brine.

I’ll check back in on this periodically for a week or two, probably ferment for about 3 months if I can wait that long, but ultimately the time will be decided for me when I run out of hot sauce!