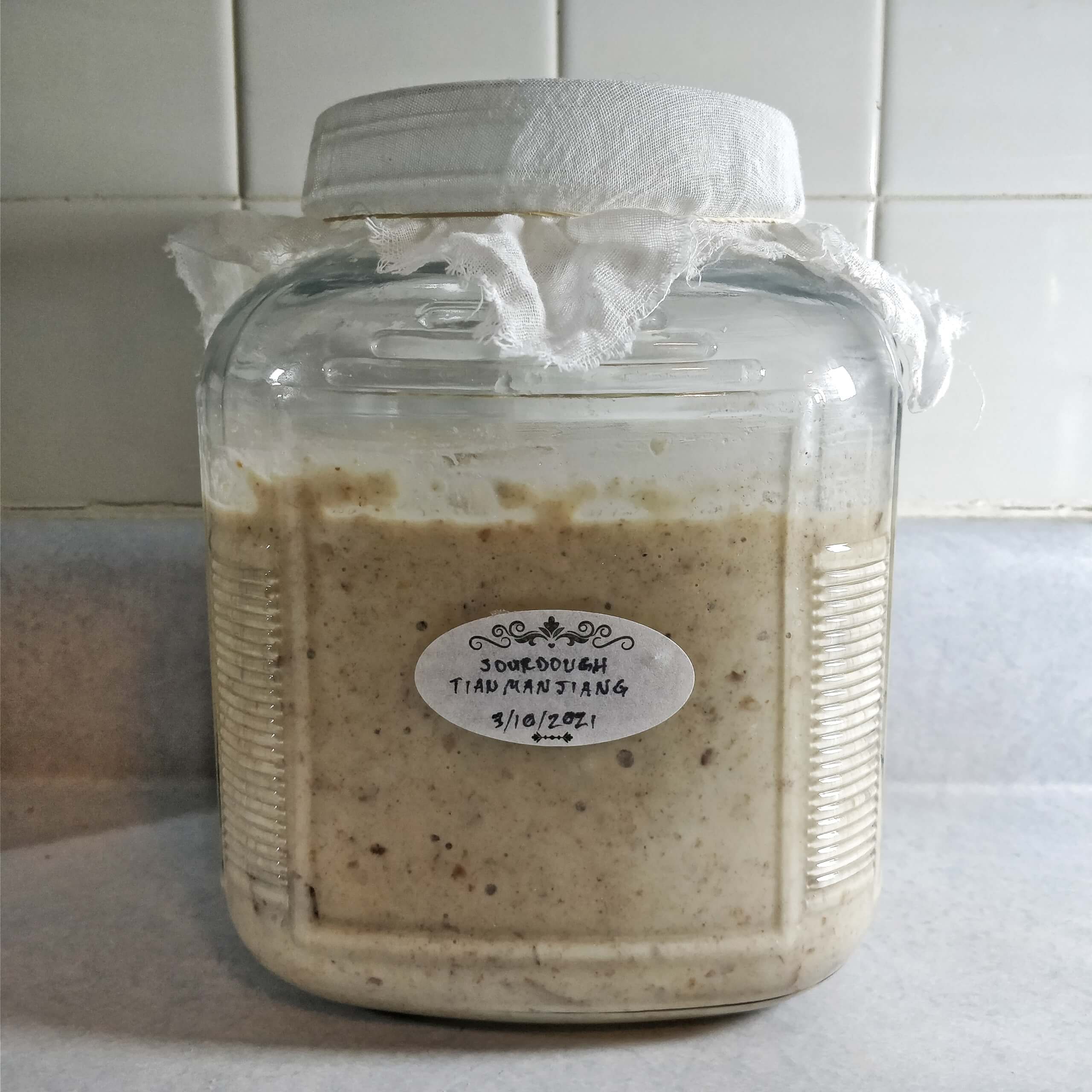 There was a very special fermented sauce recipe that came up during Mara King‘s Kojicon session and subsequent Q&A: Tianmanjiang. Apparently it was highly requested—I had never heard of it before!

Tianmanjiang, simply put, is a fermented bread sauce, though it is known also as “sweet bean sauce” due to the optional inclusion of fermented soybeans. It is usually made from leftover mantou, which are soft steamed wheat buns. Mara explained that she made her own using our friend koji, growing it directly on pieces of mantou and then combining them with water and salt. She let this ferment in an open (cloth-covered) container for a year, occasionally stirring and also setting it out in the sun when possible. This allowed the mixture to reduce and thicken while also darkening over time.

It just so happens that I had been saving the stale ends of my sourdough bread for a month or two in the freezer*. I had heard of “breadso”, or bread miso, many times (mostly thanks to Kirsten Shockey) so I figured I’d eventually do something like that. But this thick, dark sauce was too enticing for me not to try. Also, since I keep most of my discard in a jar in the fridge, I figured it would be a good chance to use a whole bunch of that up at once as well, while simultaneously injecting the ferment with loads of already active and beneficial bacteria & yeasts.

*There are plenty of ways to use leftovers or byproducts of cooking in koji-related fermentation projects, but we home fermenters often don’t have a large enough quantity to do much with at one time. The freezer is an excellent tool for those who are looking for ways to reduce waste, especially for things that you usually throw away or compost on a regular basis (like mushroom stems). Throw it in a bag in the freezer instead, and once you’ve accumulated enough you can use it for that project you’ve been wanting to try!

And so, I embarked upon this adventure. I had about 1kg of stale bread total. There was much chopping—which my “chef’s callous” was overwhelmed by, causing quite the blister. But that’s how you develop an even stronger chef’s callous!

I then steamed the cubed bread (in 2 batches, the volume of 1kg of bread is much larger than 1kg of rice!) for about 30 minutes. This served 2 purposes: heat it up to sterilize the bread, and also hopefully introduce some moisture back into it. After cooling below 100°F, the bread got a dusting of 10g dispersed spores (approximately 1g of spores total). In hindsight, I’d probably add additional flour to help coat the bread next time.

The bread was then incubated for just about 52 hours total. Usually, when incubating koji rice, 36 hours is the perfect amount for full growth before sporulation. In this case, we actually want some sporulation, but the growth on this bread was a little less even than I get on rice. I started pulling out the well-covered and sporulated pieces around hour 42 and allowed the less covered pieces to continue incubating until I decided it was enough at 52 hours. I timed the start of incubation (8pm) so that the final 36-48 hours would fall during the day (8am) so I was able to check in like this.

The trays of bread were set in the fridge, uncovered, overnight, to halt the growth and dry out just a bit.

Time to finally put this together!

In batches small enough to fit into my food processor, I blended the bread a little with enough water to moisten until chunky to increase the surface area. All of the bread mush and the rest of the water was added into an appropriately-sized glass jar.

I added all of the sourdough discard I had collected in the fridge to the mix. That brought the total weight to 2524g, which I used to calculate 10% salt, 252g, which was also added. The salt, aside from the usual protection from toxic microbes, should hopefully also keep the yeasts in the discard from turning this completely into alcohol, at least I think.

I’m keeping the jar in my “sun room”, a small porch off the side of our house that we converted into an enclosed room. It has big windows and is also home to basically all of my plants, at least during the winter. I’ll keep the lid off fairly often, and I’m hoping that the glass jar will allow that crucial sunlight darkening to take place. I’ll stir frequently, maybe once per day, for the first week, and probably once a week or so after that.

I have been keeping the lid off and stirring occasionally—definitely not like clockwork, but approximately once a week or so. The volume has reduced, the level has dropped by about 2cm or so. I didn’t think to mark the starting level initially, but I’ve marked it based on the photos from the initial state.

The aroma is fruity, with a distinct strawberry note. At least that’s what I’m smelling; my wife told me it smells like bread.

I have not been keeping up any sort of regular stirring schedule, and on top of that, it’s been hard to keep the jar in a place that will get sunlight since my plants arguably need it more.

It is seed starting time, which means I will have even less room to keep things that aren’t plants, so I’ve finally put up some shelves in this weird corner opposite the windows.

The tianmanjiang has separated a little into a clear but dark liquid on top. Perhaps if I had been more diligent stirring and sunning, the entire contents would be that dark and probably thicker.

I have collected another large batch of sourdough bread ends so I’ll be looking for something to do with those soon. I think I’ll keep this tianmanjiang around, possibly for another year, and try to stir it a bit now that it shouod be getting some sun.