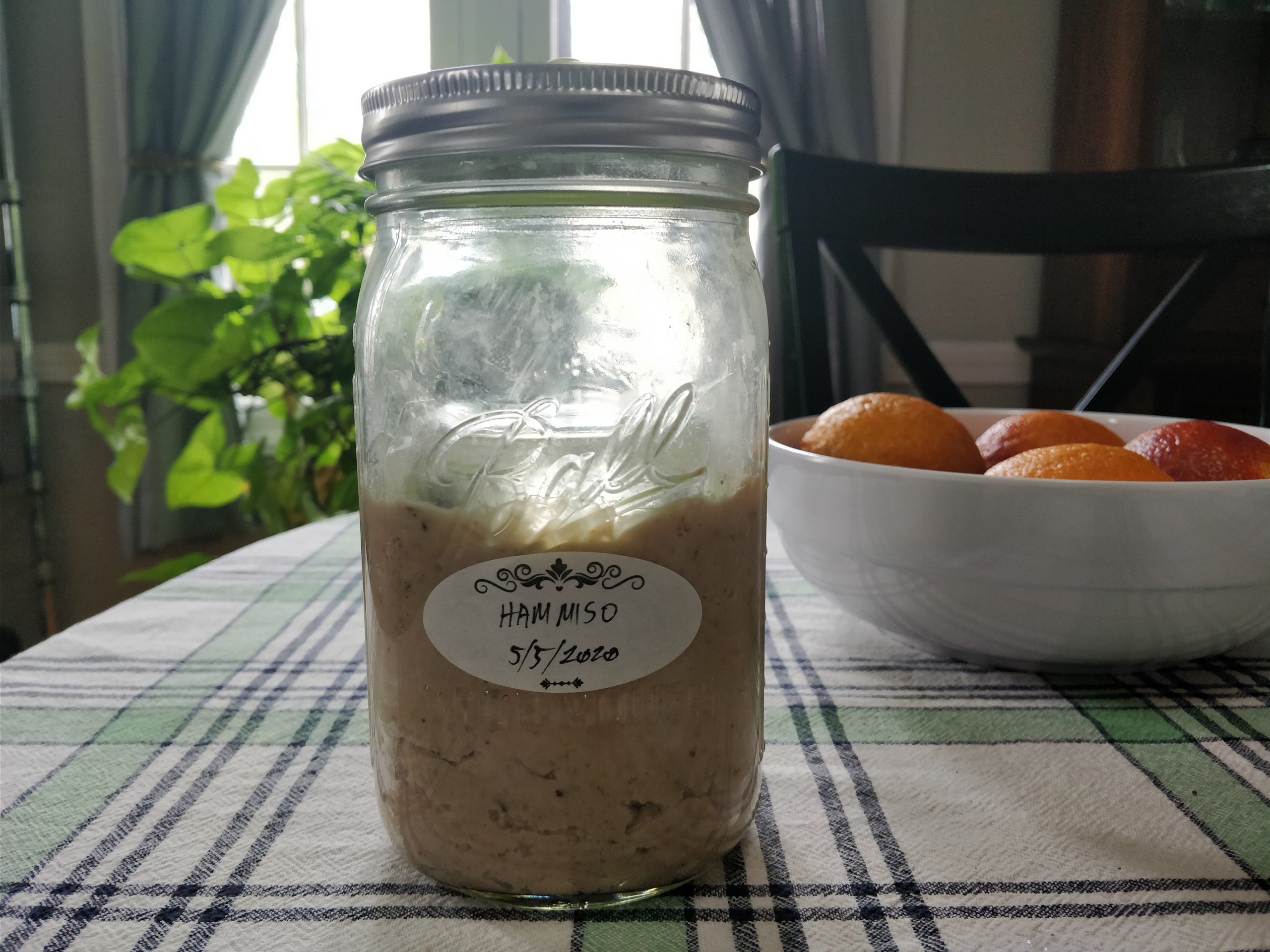 Who does this guy think he is, Head Hamma Jamma or something?

Me, writing this right now

I tasted bacon “miso” many months ago at a koji workshop taught by Jeremy Umansky at Larder Delicatessen & Bakery here in Cleveland, Ohio—and I haven’t stopped thinking about it since. In a traditional sense, “miso” is a specific food made from koji rice and soy beans, but the method can be applied to just about any other source of protein.

This, then, is what we might instead call an “amino paste” as Jeremy likes to classify it, as the koji’s enzymes create loads of tasty amino acids from the protein source. However, even Jeremy has conceded that labeling his amino paste made from matzo balls “Matzo Ball Miso” is a bit more straightforward and consumer-friendly. Not to mention it has a nice ring to it.

I have leftover unsliced ham from Easter that I’ve decided to experiment with. Ham is already a preserved food, having been cured in salt and sugar for a time to create that characteristic hammy taste. Therefore, I’m going to need to account for the salt existing in the ham when I do my salt-by-weight calculation later. On average, it looks like hams have around 4% salt by weight. I’ve diced it up finely and will bring to a boil in some water to sterilize and soften the ham.

If you’ve ever brined anything else for a little too long, like a chicken breast, you will notice that it tastes hammy as well!

After holding at a boil for a few minutes, I let it cool for a while, covered, until down to about 110°F. Put into a blender and pureed until relatively smooth. After adding the koji we’ll have to see if any extra water is needed.

110°F is on the high side of the safe temp for introducing koji, but the koji was in the refrigerator and is probably around 40°F, so we’re good. I’m adding roughly a 1:1 ratio of koji rice to the ham.

Added rice to the blender. The puree is a perfect consistency—it holds together when squished into a ball, with no crumbling or dripping.

At this point, I’ve got a mass of ham & koji puree and I need to calculate an amount of salt to add. We’ll say that it already contains about 8g salt. First we calculate how much salt is needed in total to get to 5% of the weight of the substrate:

So we need 27g of salt total in the mix, which already has about 8g, so I’m rounding up and adding 20g.

And I almost forgot, it’s always a good idea to inoculate a new batch with a successful prior ferment. Added maybe a teaspoon of mature, active miso.

Otherwise known as “backslopping”, but it’s a pretty gross word.

Not much to report, but I wanted to check in and see how things are progressing. A small amount of “tamari” is pooling on the surface, but not really enough to pour off to enjoy as an amino sauce.

Enough air pockets we’re forming that I decided to repack. I poured off about 1 tablespoon of tamari and scooped a little of the looser paste on top out to have with some rice: surprisingly sweet with no off flavors! I then recompacted the paste with my pickle-packer and replaced the plastic wrap and weight. I should have taken a photo before doing so, sorry.

As with many of my long-running ferments, I often forget about them well past my intended finish date. I planned for this to be a short miso, somewhere between 3-6 months, evident by the high percentage of koji rice and lower percentage of salt (I usually do at least 10% for year+ ferments). But to me, that’s really the beauty of this practice—my favorite ferments only get better with age!

Here it is, 10 months later. Do you see those white streaks? Those are probably tyrosine crystals, the same things that feature prominently in good, aged parmesan cheese and indicate proteolysis (in other words, the koji enzymes are doing their job).

This is good timing anyways, because it means that I can use last year’s Easter ham as a flavor enhancer for this year’s meal, potentially in the ham glaze: ham-glazed ham anyone?

The consistency has loosened considerably over time, so I’m not sure I can really call this “miso” anymore. If I’m being honest, due to the use of meat, it would probably be considered a garum. If I had strained/pressed this I would have ended up with something akin to fish sauce, so I’m going with “ham sauce”.

Instead, I blended until relatively smooth. It is now the consistency of soft serve (and kinda looks like chocolate-peanutbutter). I’m wondering if perhaps next time I might steam the leftover ham instead of boiling it to achieve something closer in consistency to a miso.

It still tastes very much of ham, but there’s a few other things happening. The sweetness is striking, much sweeter than I expected—not like sugary but certainly reminiscent of a glazed ham. I suppose the high koji rice content contributed a lot of it’s own starches to be converted to sugars. There is also the trademark flavor of very slow maillard reactions, a nutty, earthy backdrop. And of course our friend umami is at this party as well!

With it’s consistency I think this would make for a good marinade, but it should work anywhere miso or even fish/oyster sauce is called for. I’ve ended up with around 10oz (volumetric).