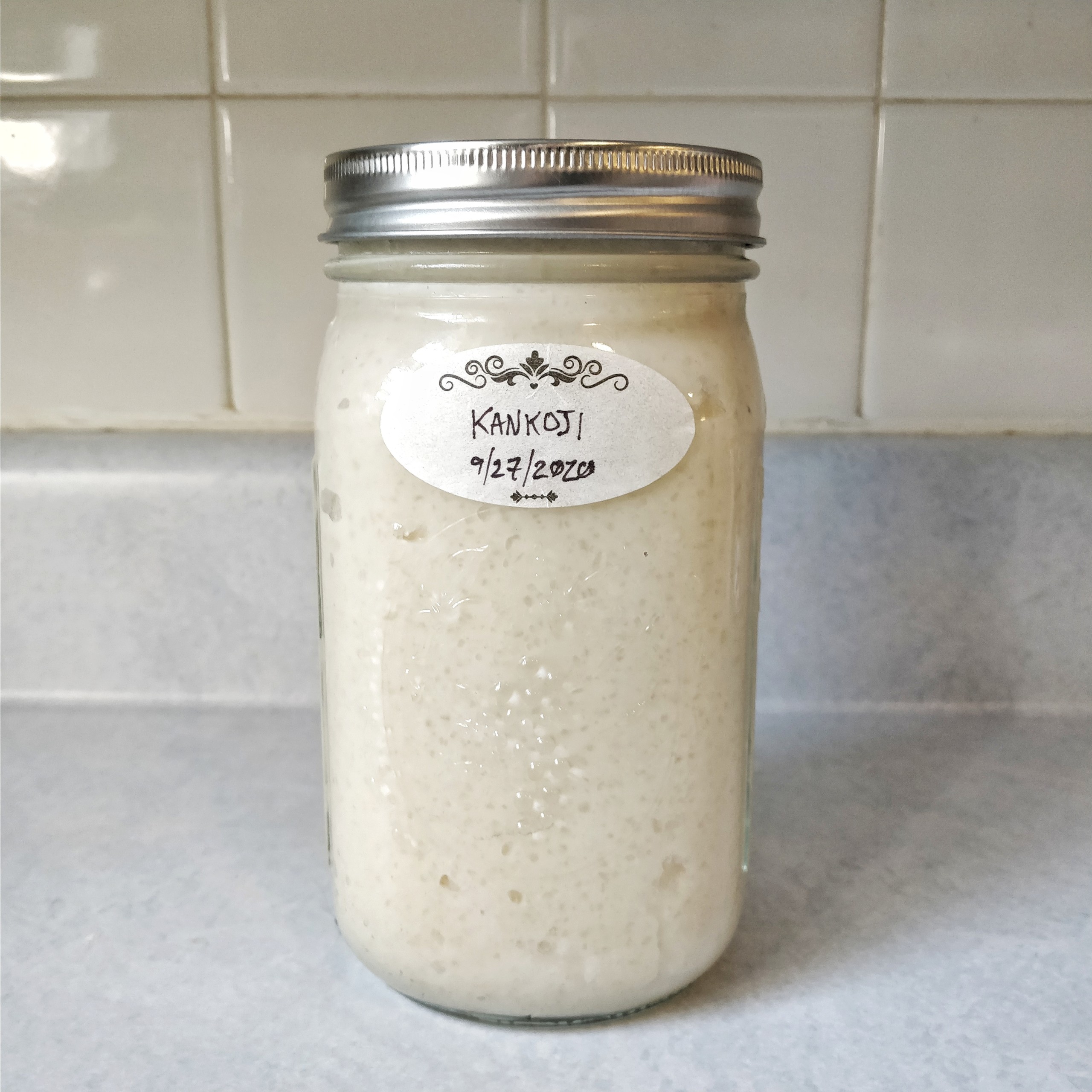 A few weeks ago, I was intrigued by a post to /r/koji on reddit asking if anyone had ever made “kankoji” before.

I was led on a bit of a wild goose chase after finding another Instagram post describing “a luxury use of rice koji”, with a photo of a recipe written in hand-lettered Japanese. Someone kindly translated it for me—turns out it was a miso soup recipe! However, they also translated kankoji as “cold koji” and described a method they were familiar with. Sticky rice is made into a porridge, then koji rice is added to make amazake, which is then salted and aged for 6 months.

While the poster wasn’t particularly forthcoming with a recipe, they did explain that it is made from koji rice, cooked glutinous rice, and salt. From this I surmised that this is what I might call a “rice miso”. That is, the main protein source is rice instead of soy beans or some other protein-rich substance.

I’m following a simple and fairly standard method of 1:1 rice koji to protein source by weight with 10% salt, which should give us a fairly long-lasting ferment.

The koji rice and cooked rice were mixed as best as I could (I should have also added the salt here but forgot). To get the smooth paste look like the Instagram post, I decided to put it through the meat grinder attachment of my stand mixer. I still did not quite achieve the smooth texture of the photo, but that may come with time as the koji rice grains break down.

About 80g of the total mixture was lost to the grinding process, but it was so thick and sticky that I added that back in as water to loosen it up a little. I also remembered the salt and added that in, mixing with a rice paddle.

This all fit a little too perfectly in a 1L mason jar, so I was able to use a lid weight technique I learned from Koji Alchemy. After salting the top surface, a regular-mouth lid and ring inside a plastic bag are placed on top and the outer jar lid is screwed on loosely but enough to push the inner lid down very slightly like a weight.

I’m interested to see if I get any tamari from this. Check back in a few weeks!

A question came up in the Kojicon 2022 Slack about doing a rice-only miso, and I remembered this.

If you use the lid weight technique, be sure to also place your jar in a tray, because it will probably leak, since there’s no room for anything to go anywhere else but out. This didn’t leak too badly, but you can clearly see that it weathered the label. That is where the “tamari” will go, but there wasn’t much of it.

The underside of the weight has developed the same kind of rubbery film as the Spooky Pumpkin Miso did. There was minimal mold growth around the top of the weight since the space was so tight, so that’s a win.

As for the “rice miso”? Well, I don’t think adding water was the right move, but it would probably have ended up soupy regardless. Now I understand why it was compared to shiokoji—it basically is shiokoji, kept for much longer.

It tastes absolutely delicious. Packed with umami, but still somewhat sweet, very much like shiokoji but richer. I would definitely not call this a miso now—it’s barely a paste at this point—but it is pretty wild to see a solid mass of rice liquefied by the power of koji enzymes over time.

I’m honestly wondering if you couldn’t make basically the same thing by putting the jar into a water bath at 140°F/60°C for 12 hours, vs. keeping it on a shelf for a year while it leaks and might grow mold. Maybe there was some other microbial activity contributing to the color and flavor? I should do a test to compare.

Actually it’s obvious it wouldn’t be quite the same, just considering the yellowing. I see this happen in all of my long-aged koji ferments, particularly sake and mirin. I don’t know what is responsible, whether it’s due to sunlight or some other process which I don’t usually see happen in shiokoji or, for that matter, quick “ferments” put in the sous vide.