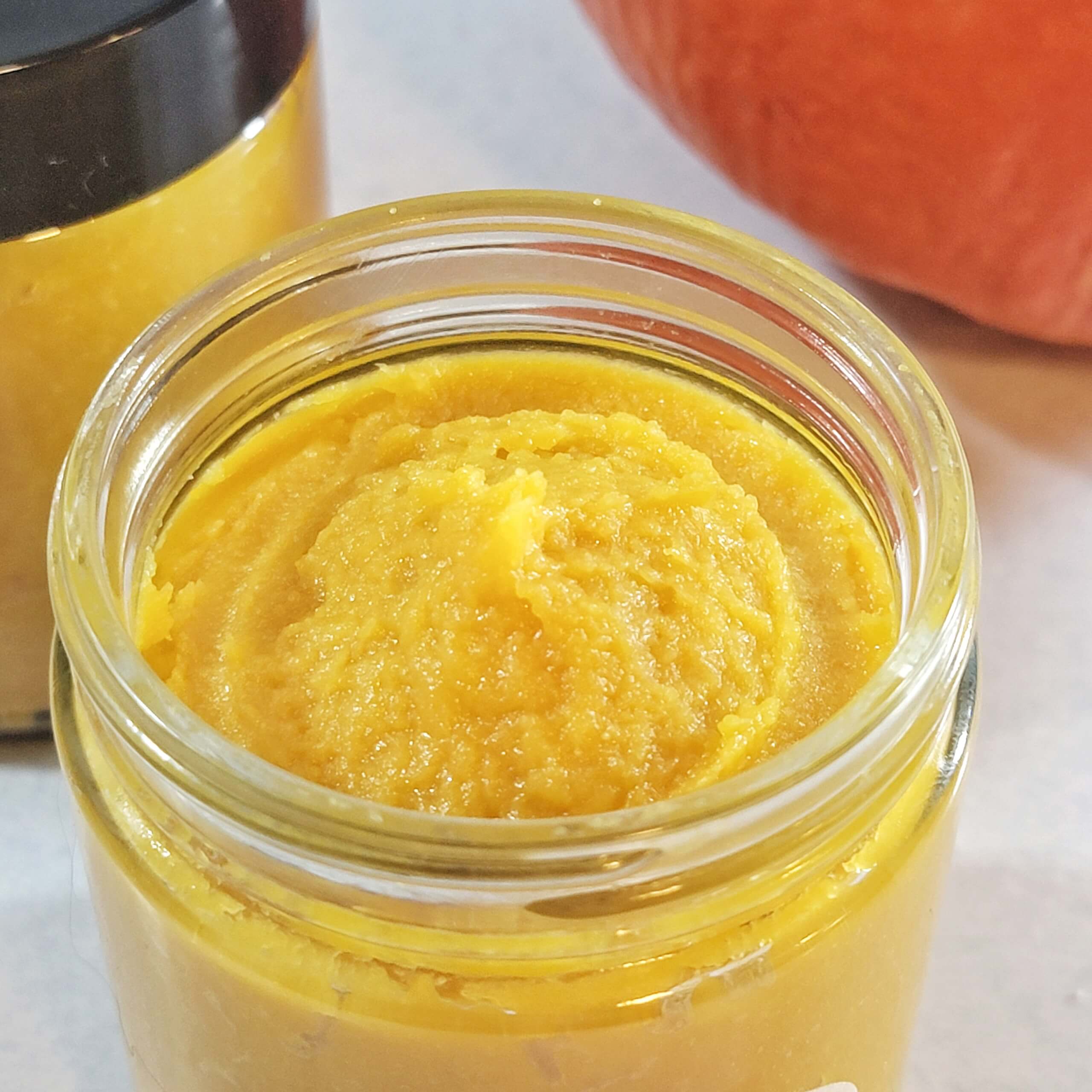 Every year we roast a pumpkin, make soup and pie and whatnot, and then I freeze the rest. And every year, when I go to put it in the freezer, I find last year’s pumpkin puree! There’s only so much pumpkin I can stand this time of year, but this time I decided to experiment with last year’s puree.

I just recently made tomato paste from my homegrown tomatoes for Shio Koji Ketchup, and I took a similar approach here. Spread the pumpkin puree out on a baking sheet set in a 200°F oven for 12 hours, stirring occasionally, until it had reduced to nearly 25% the original weight!

You know your pumpkin paste is done when you can form it back into a pumpkin.

Mixed & packed into a quart jar. I used the “throw tiny balls of the paste into the jar” method to minimize air bubbles, after first sprinkling salt into the bottom.

I then covered with a thin layer of salt and packed a sealed plastic bag of salt on top to act as a weight. I’ll see you on Halloween next year!

It’s time to open the crypt and find out what awaits us beyond the Veil… of Time!

I opened the lid and removed the bag of salt to uncover… A scoby?*

It doesnt get much spookier than growing what looks and feels like wet skin in a jar with other stuff that you plan to eat! But don’t worry, it’s not only not harmless, it’s a common (desired, even) byproduct of some ferments, most notably vinegar and kombucha.

Does that mean my miso is going to taste sour? It doesn’t smell like vinegar—in fact, the smell closely resembles the aroma of freshly-incubated koji rice. If you haven’t had the pleasure, it’s often described as apricots and honey. This is usually an ephemeral odor that dissipates, but here it is in my “miso”! Spooky!

As I spooned some out, I was even more surprised at the consistency. I had expected this to break down into something much looser, but this holds it shape well, just like what I’d expect from a traditional miso paste.

Unsurprisingly, it tastes like salted pumpkin, but better. Like what I wish a pumpkin actually tasted like straight outta’ the gourd. This is gonna be killer to use in both sweet and savory applications, especially where there is fresh pumpkin present.

I was not thrilled, however, with the texture. While it’s not chunky or grainy and melts together well in the mouth, I was worried that the miso caramel I wanted to test this with would be lumpy if I didn’t do something to smooth it out. It’s too thick for a blender to help with, so I reached for my trusty fine mesh strainer.

The scariest thing of all: I need to invest in a chinois.

After using some for the miso caramel (recipe below) and some to marinate a pork loin for the big day tomorrow, I’m left with roughly 2 cups of miso, one for me and one to give to a friend.

And now finally, for the miso caramel!

Wow. While it doesn’t scream “pumpkin” it is really, ridiculously good. Maybe it’s the combination of homemade crème fraîche and the umami from the miso, but it’s seriously buttery and I can’t wait to drizzle this onto some pumpkin pie.