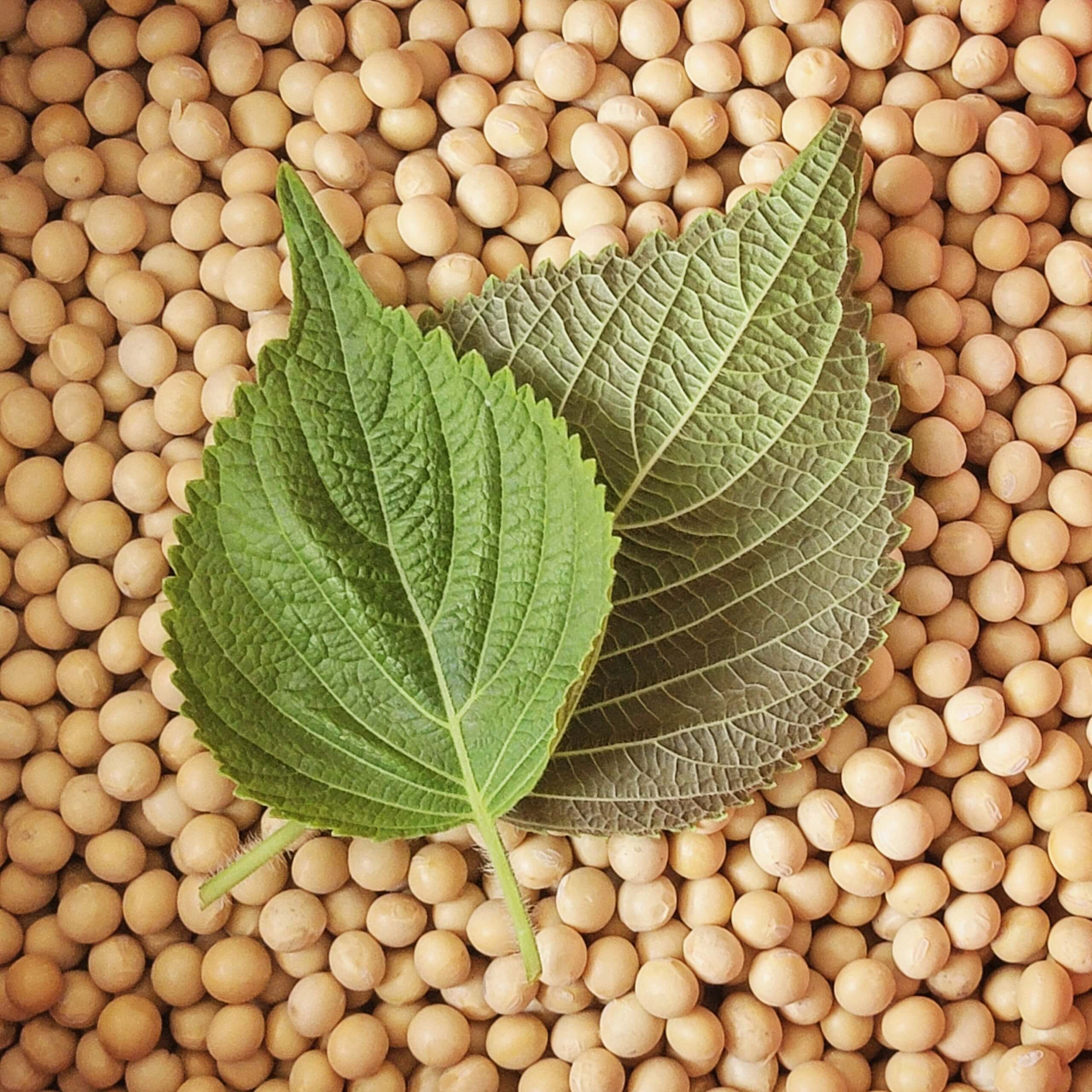 Last week during our roughly-weekly hangout session in the Crock of Time Discord on Sunday, I started a batch of koji rice. I needed that koji rice because I wanted to make this specific miso that I’ve been thinking about for a year now, ever since I added a few shiso (or as they’re known in Korea, perilla) leaves to some shio koji.

The weather is turning here and the shiso plants are no longer holding up their own weight, so it was past due that I made use of them. Will it actually be any good in miso? I have no idea! Isn’t that part of the fun of it?

This is basically my standard method of miso making with shiso thrown in. I start with 1 dry kilogram of both soybeans and rice, and after soaking/cooking each (and growing koji on the rice) the ratio ends up roughly 1:2 koji rice : cooked soybeans. This ratio coupled with 10%+ salt is ideal for a year-long (or longer) ferment.

In the morning around 8am, I sorted, rinsed, and set the soybeans to soak.

By 6pm (roughly 10 hours*) the beans had doubled their weight. After draining, I cooked them by pressure steaming in my Instant Pot. With 4 cups of water in the bottom and a foldable steaming rack above the water level, I filled my 6-quart Instant Pot nearly to the top (ensuring the valve had clearance) and cooked on high pressure (10psi) for 45 minutes. With the hangout starting at 7pm I was not going to wait for natural release, so I did a quick release of pressure and the beans were perfectly cooked.

Most authorities on the subject suggest soaking soybeans for 18 hours. I was surprised to find a scientific paper that suggested soaking soybeans for only 5 hours at 55°C is best to prevent isoflavone loss, if you’re into that. They also noted no additional softening past 5 hours.

I did most of the rest during the Discord hangout and, of course, completely forgot to take pictures of the process. It’s probably for the best, since it was mostly 2 hours of me grinding and mashing stuff to mix together.

Koji rice was roughly ground up in the food processor, then the cooled soybeans (in 4 batches), and then the shiso leaves.

After mashing all of this together and adding about 10% salt, the total weight of the miso is roughly 4kg.

I did add a few splashes of the steaming liquid left in the pot to loosen the paste slightly. It was then thrown, one rolled handful at a time, into this lovely black-glazed crock from the CinSoy Foods funding campaign. Here is the result after tamping it down and salting the top.

Honestly I was hoping it would be greener, but since I just used a food processor to chop up the leaves instead of taking the time to grind them into a paste with a mortar & pestle, the bespeckled look will have to do.

I used some extra shiso leaves as a layer on top (was this a good idea? We’ll see!) and then covered with a small stoneware side plate that I hopefully won’t need for a year. On top was placed roughly 2kg of weights, half of the weight of the miso itself.

After covering with some butter muslin and securing with a large rubber band, we’re done! I managed to lug this thing down to the basement to hang out with the other misos.

It is at this point, while writing about it after the fact every time, that I remember that I forgot to add some mature miso into the mix. It’s not critical, and I could dig it all out and re-mix it, but am I going to bother?

The tamari is appearing! I’m holding off trying to collect any for a little while, mainly because I’m not sure how to do this without breaking something (myself included).