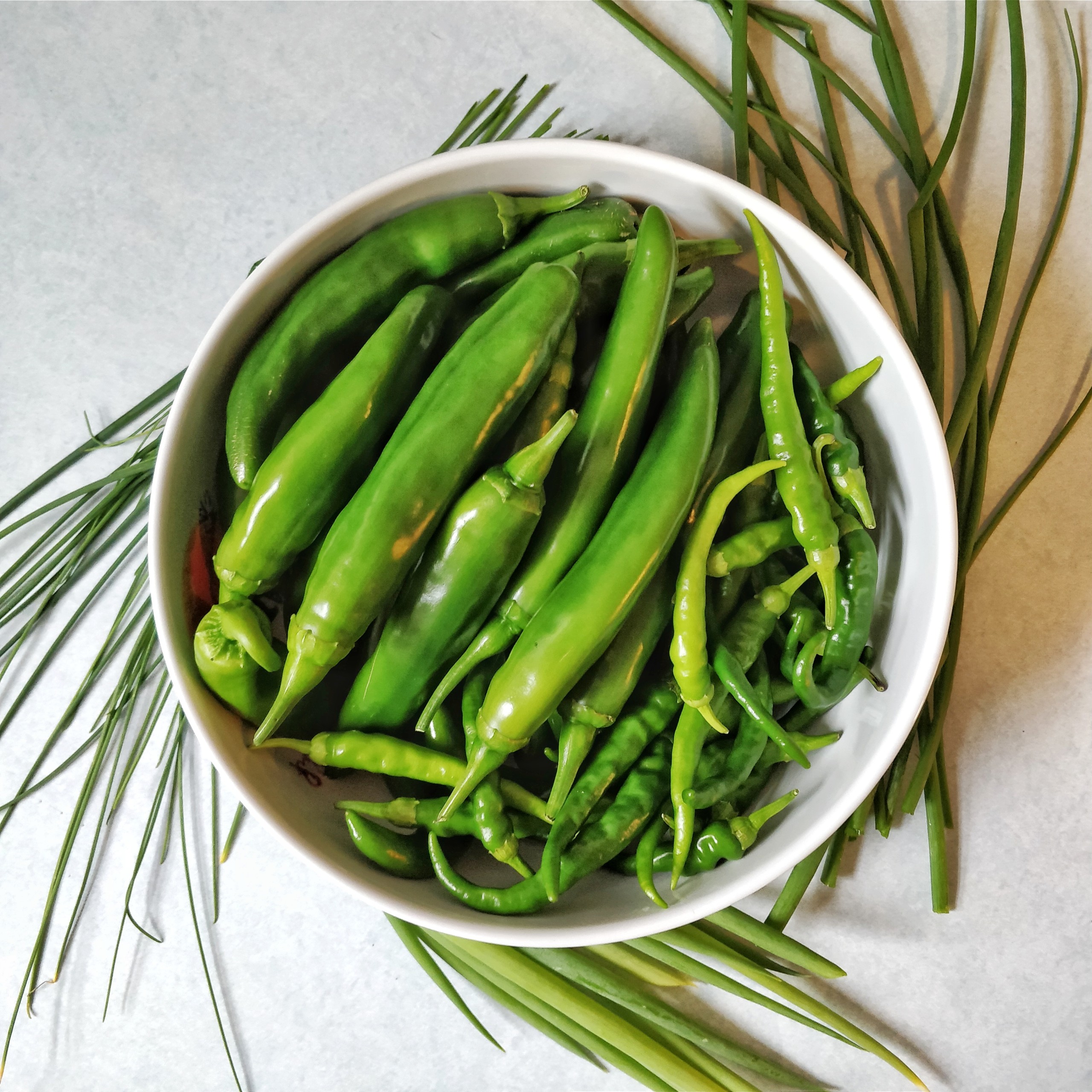 Is this déjà vu? Didn’t I already finish a logbook for Green Chili Sauce ft. Barley Koji and call it Farore’s Favor? You bet! In the early months of the year I was getting desperate for some hot sauce, as my first lactofermented hot sauce made from last year’s chilies was running low. So desperate that I bought some jalapenos and poblanos from the store.

It’s now October, and a creeping chill is settling across the Northeast US where I live. That means that the chili plants I grew from seed in the back garden are signing off for the season. I harvested all of the green chilies left on the plants, so now I can do an even better spicy green condiment with my own chilies and everything I learned from making the last few.

While Farore’s Favor is delicious, it’s not particularly spicy. It also used barley koji, which, while certainly not bad, is not my favorite koji medium. To be fair, I’ve only tried growing koji on rice and barley so far, but the umami from the rice has me completely enchanted.

Early last year I did a small-scale experiment with some red fresno chilies, garlic, rice koji, and salt. I let it sit on the counter for 6 weeks, stirring occasionally to prohibit mold growth (which became a losing battle near the end). My notes from that tasting say it’s “ok”, sweet, and that the rice grains had not broken down much. I tossed it in the fridge and forgot about it for quite a while.

And then, I rediscovered it early this year. There is very little left, because it became my favorite hot sauce in the fridge. Since the enzymatic process of koji can be quite slow, it gradually continued to improve over time.

When I compare that early koji hot sauce experiment with Farore’s Favor, a few things jump out:

There’s a lot to like with the “mash” ferment, especially that you don’t end up with brine that has leeched away some of the flavor and heat. The largest downside is the prevalence of mold, but I have a new trick up my sleeve for that, as featured in the Vacuum Bag Hot Sauce logbook.

Here’s an outline of what I’m planning:

That last step comes from Koji Alchemy for making Amazake. That’s the optimal temperature to put the remaining enzymes into hyperdrive, and will also pasteurize the mash simultaneously.

I first ran the koji rice through the food processor, which didn’t do much honestly. Processed everything else and blended together. I carefully sealed in a vacuum bag with plenty of room for expansion. Should be ready after the ball drops on New Years Day 2021!

I’ll be honest, I was getting a little worried about this one. I checked up on it a couple of times in the weeks after sealing it up, and I saw no discernable CO2 production. I then forgot about it until today, and I guess I never should have worried! Things are looking good, just a little less than 2 more months to go!

While checking up on things, I flipped the bag over a few times and must have manhandled it too much, because the bag suddenly started deflating. I found the hole and patched it with some nearby duct tape.

I probably should have deflated it earlier and properly re-sealed it before it became pressurized.

Aside from that bit of excitement, the contents have a much thinner consistency than I was expecting! I’m probably going to have to rename this logbook from “Chili Paste” to just “Hot Sauce”, because I’m pretty sure it would be the perfect hot sauce consistency of I blended it up now. This rice koji is powerful stuff!

Today is the day I bottle this green monster.

I didn’t intend to leave it for another month with the duct tape, but as per usual, I don’t stick to a strict time table with my ferments.

Due to my struggles with the food mill in a previous hot sauce ferment, I’m pulling out the high-powered blender for this one. Everything is going straight into the blender, and if I have to strain it after, so be it.

The volume comes to roughly 850mL, and after pouring it into the blender it’s a bit thicker/chunkier than I thought a month ago. Still, there’s a huge difference in the amount of free liquid here than in the no-koji vacuum bag chili ferment.

Still, after blending, this definitely lives up to the “paste” characterization—I’d say it’s about as thick or slightly thicker than sriracha. It would be perfect for a squeeze bottle, but I don’t have any on hand, so my standard 150mL glass woozy bottles will have to suffice.

And besides, this time I’m going through with a pasteurization step. I had generally been hesitant to do it before for fear of altering the flavor and whatnot, but I’ve since learned something amazing about koji, or specifically the amylase enzyme it produces. Amylase is at peak performance at 140°F/60°C, which happens to be in the pasteurization temperature range. It takes longer to ensure pasteurization at lower temperatures, but Time is always an essential ingredient! 2 hours in a water bath with my immersion circulator set to 140°F should be more than enough time.

So, now that it’s bottled and pasteurized, I need to label them, and for that I need a name. What should I call this thing that spent ages locked away in a transparent vault, able to watch the world go on but not interact with it, all the while growing in power such that the seal could not longer contain it, bursting forth upon the world transformed by this confinement? Well, what else but Gannon’s Greed?

At once vegetal and bright, with a sweetness and lingering tingle on the tongue, there is a definite underlying umami savoriness that keeps me coming back for more. The viscosity, without having used any thickener, is gloriously unctuous, which clings to the bottle when upturned but gushes forth after one or two shakes. Considering I added nothing after the fact—no salt, vinegar, MSG, or xantham gum—this may be my greatest achievement yet.