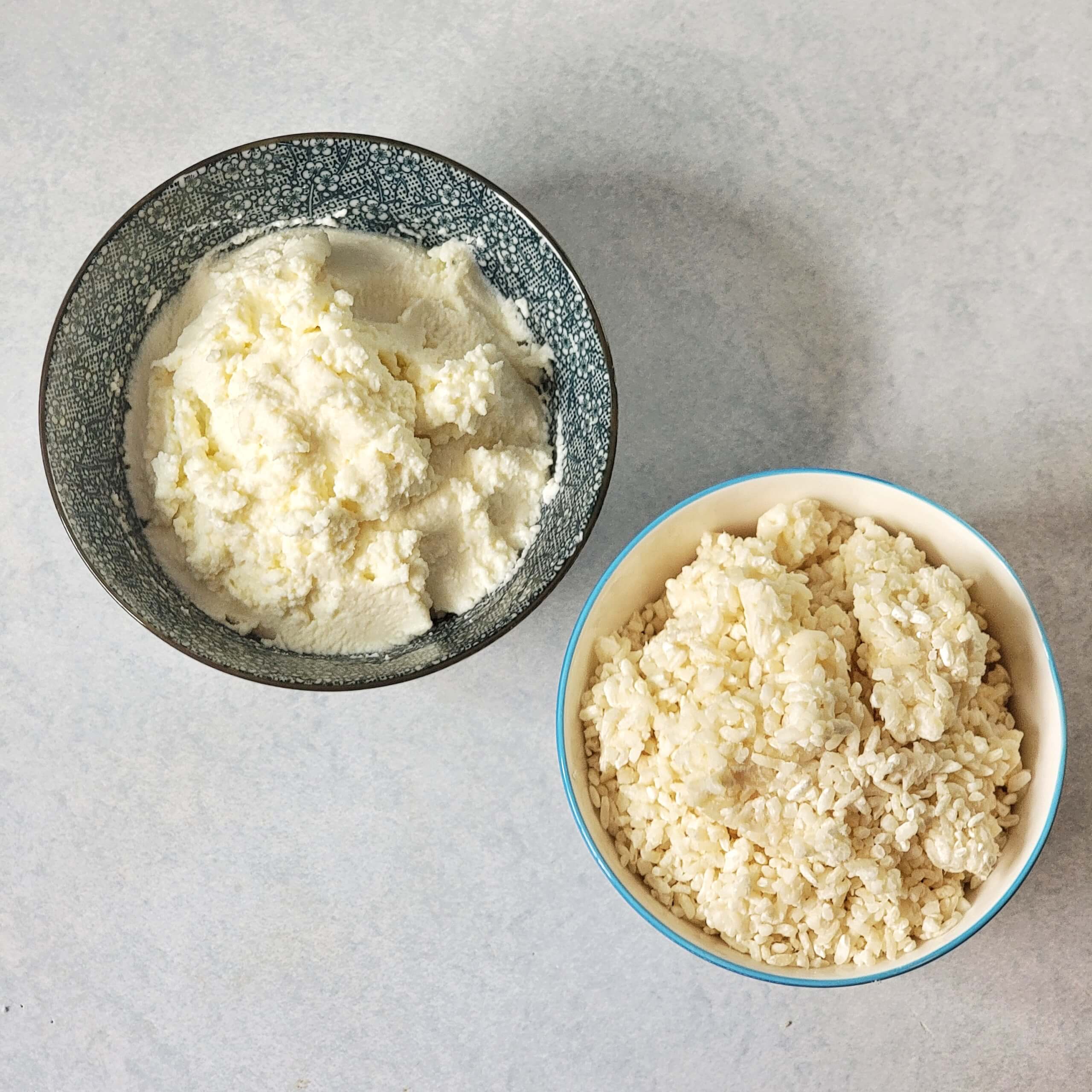 This is a quick experiment applying koji to ricotta cheese for a big umami boost. There is an entry by Rich Shih in Koji Alchemy for a koji ricotta “Miso Cheese” held in the fridge* for 2 months, but I’m impatient so I’ll be speeding this up with the application of just the right amount of heat.

Kept in the fridge to reduce rancid flavors from the high fat content. I’d like to test this without refrigeration, potentially with higher salt.

Everything I’m reading says that the protease enzymes I’m after peak at 50°C/122°F, not the 60°C/140°F that I’m usually setting my quick ferments at. This is lower than the lowest pasteurization temperature of 54.4°C/130°F, so I’m letting this go for 6 hours and increasing to 60°C/140°F for the final hour.

Initially I was going to salt to taste, but I decided against when deciding to use the lower processing temperature. It was a little overly salty, as the ricotta is basically a blank slate that only really brings some texture.

The mix was added to a vacuum bag and sealed, and kept at temperature in the sous vide.

After 6 hours I tasted it and was shocked. The richness of the umami is incredible! The salt content has not changed, but like a miso that has aged for a year, it has become a background element that props up other flavors.

It is an almost surprisingly clean umami taste, because of course the environment was not hospitable for other flavors to develop from yeast, lactobacillus, and acetobacter activity. But not like if I were to add MSG directly*. The flavor is deeper, fully integrated, with a hint of cheesiness that is not bitter.

*I have tried MSG in cottage cheese—it completely takes over and can be unpleasant.

There is a subtle undertone of sweetness from the rice. I was afraid it would be too sweet, but again, I’d compare it to the sweetness of a miso.

There is very little acidity to speak of—Philadelphia cream cheese is more acidic. I expect that, even after pasteurizing, the lactobacillus may take hold in the fridge. Might end up eating it all before that happens, though.

The texture is not as unpleasant as it might look. It has lost most of its ricotta texture, which I can only compare to very finely ground styrofoam. Instead, it has smoothed out and become almost gelatinous, which should be pretty familiar if you’ve done a shiokoji before. Of course the bits of rice grain add a little texture but they’re pretty soft and yielding. I could blend this smoother but I don’t think I’ll bother.

I can absolutely recommend spreading it on some Amazake Sourdough toast with homemade chili crisp.